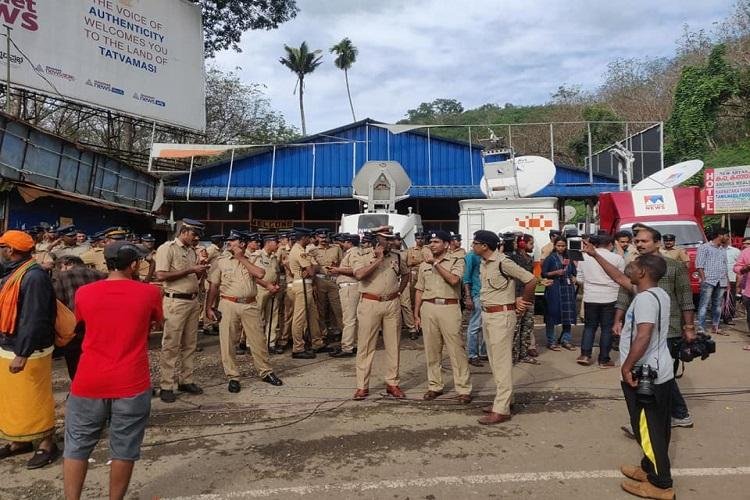 According to reports, the Kerala government had instructed the police to not permit women between the ages of 10-50 to the hill shrine, in defiance of the 2018 Supreme Court order. As many as 10 women pilgrims from Andhra Pradesh who were below the age of 50 were turned away by the Kerala police, 5 kms away from Sabarimala on Sunday. The temple opened opened on November 17 for the annual Mandala Makaravilakku season which sees massive crowds.

According to reports, the Kerala police have been instructed by the state government to not permit women between the ages of 10 and 50 to climb the hill shrine, in defiance of the Supreme Court verdict which allowed all women irrespective of their age to enter the temple.

The police are turning back women below 50 years of age at the Nilakkal bade camp, 5 kms away from Sabarimala. Kerala Devaswom Minister Kadakkampally Suremdran stated that ‘women activists’ will not be allowed to climb the hill shrine and that any woman who chose to visit the sabarimala temple can get police protection via a court order.

Last week, a 5-judge constitutional bench hearing the review petitions in a 3:2 judgement kept the pending review petitions and transferred the issue of essential religious practices to a larger, 7-judge bench. However, the bench had not issued a stay on its September 2018 judgement which allowed women of all ages to enter Sabarimala. According to legal experts, this means that women can still legally enter and pray at the temple.

Speaking to TNM, right to pray activist and leader of the Bhumata Brigade Trupti Desai confirmed that she will visit the temple regardless of the government providing police protection after November 20. Last year, Trupti Desai along with others of the Bhumata Brigade were forced to turn back after arriving at the Cochin International Airport due to massive protests.

“Kerala government is responsible for upholding 2018 judgment, since there is no stay imposed on it by the court. Women who visit the temple are confronted by some people who indulge in violence and abuse women, so Kerala government is obliged to give protection. If not, then it is an insult to women as well as the Supreme Court,” Trupti told.