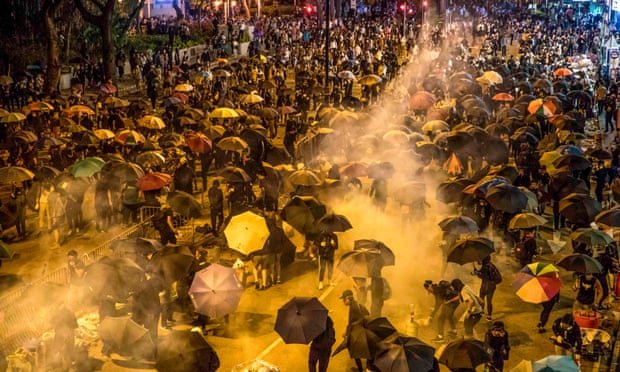 The authorities’ repression has only fuelled the crisis. It is up to them to de-escalate, as others should tell them

‘Excessive force and police brutality have accelerated and magnified these protests, turning what began as a rejection of the extradition bill into a far broader movement.’

Hong Kong is burning. The authorities continue to pour fuel on the fire. On Monday, the People’s Daily, the mouthpiece of the Communist party, warned that there is “absolutely no room for compromise”. But it is not merely that Beijing and the Hong Kong government will not take a step back; they continue to escalate the crisis.

As the newspaper commentary was published, Hong Kong Polytechnic University was besieged by police, who fired round after round of teargas at protesters attempting to flee the scene. The message – no way out – was all the more disturbing given that officers had earlier threatened to use live fire if petrol bombs or weaponry were used against them again. Among the hundreds trapped were said to be secondary school pupils. Parents, lawmakers and a bishop who sought to talk to protesters and seek some kind of resolution were prevented from doing so, though the former head of Hong Kong’s legislative council was later allowed to enter. When tens of thousands more residents launched “save the students” marches converging upon the campus, they too faced rubber bullets and teargas, in some cases after people threw petrol bombs.

Excessive force and police brutality have accelerated and magnified these protests, turning what began as a rejection of the extradition bill into a far broader movement, and persuading a large section of the population that they should support it. The withdrawal of the bill was far too little, too late. Meanwhile, banning most rallies has closed off a peaceful avenue for challenging authorities.

Though many remain peaceful, a radical minority of protesters have responded with unacceptable violence. Many in Hong Kong will deplore that decision and were rightly repelled when a man was set on fire last week, apparently by a protester. Another man died after he was hit by a brick during a clash between protesters and police. But a large proportion of the population still blames those in power for this crisis, and it is likely that more stand by the cause: defending Hong Kong’s way of life, safeguarded in theory until 2047, but dramatically eroded in recent years. Meanwhile, they note that the People’s Liberation Army took to the city’s streets to clear barricades this weekend: a “voluntary clean-up activity” which acted as a reminder that the Chinese military could yet be called in, and which many saw as an attempt to normalise their presence.

The movement’s resolve in Hong Kong is also a response to events on the mainland: the increasing repression seen under Xi Jinping, most of all in Xinjiang. As government documents leaked to the New York Times have unveiled, the mass detention of a million or more Uighurs and other minorities originated in directives from Xi to “show absolutely no mercy” in the “struggle against terrorism, infiltration and separatism”. Many in Hong Kong fear that to pause or seek compromise is to surrender entirely. Further repression in the region will provoke the kind of ongoing resistance, even insurgency, that some have called the “Belfastisation” of the city.

Further afield, the crisis has boosted, to Beijing’s chagrin, the prospects of Taiwan’s incumbent president, Tsai Ing-wen of the Democratic Progressive party, as she faces next year’s election. And the Hong Kong Human Rights and Democracy Act, under consideration by the US Senate on Monday, would impose economic sanctions and a travel ban on officials deemed responsible for human rights abuses.

China’s leaders may still believe all this is a price worth paying. Since 1989, when it crushed the pro-reform protests that began in Tiananmen Square, and witnessed the beginning of the end for the Soviet Union, Beijing has calculated that bloody suppression should be avoided if possible – but not by offering concessions. It will angrily dismiss any criticism, as it has that from Britain. Ignored or not, foreign leaders have a duty to remind China that they are watching.