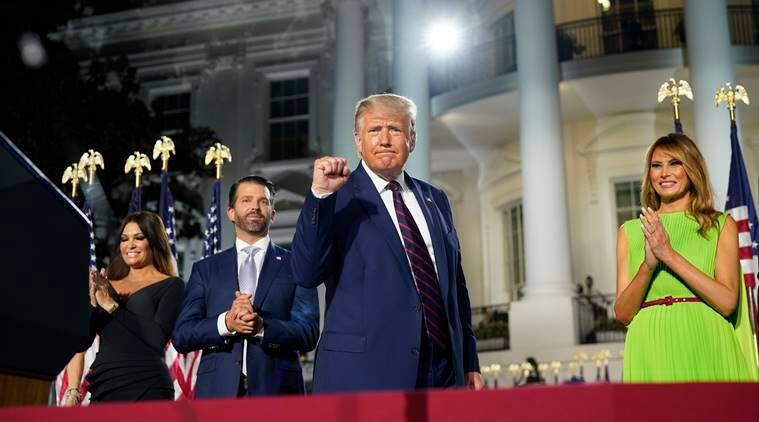 Donald Trump also repeatedly accused his opponent and Democrats of failing to take on rioters, though Biden has condemned recent acts of violence, and of harboring designs to restructure the American economic system along socialist lines. 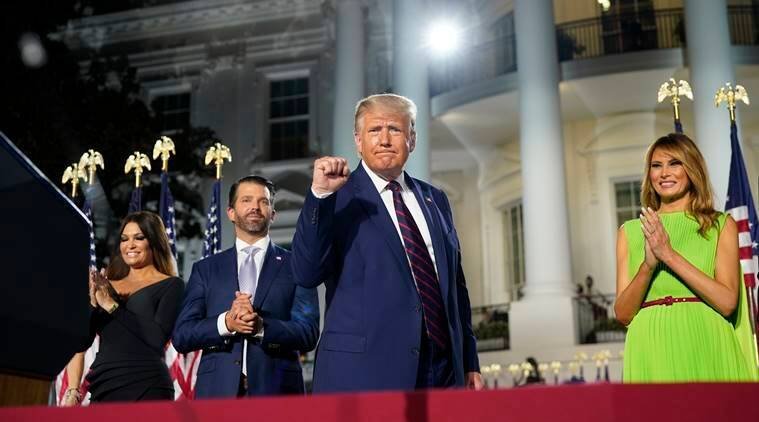 President Donald Trump is joined on stage by family members during the final night of the Republican National Convention, on the South Lawn of the White House in Washington, on Thursday, Aug. 27, 2020. From left: Kimberly Guilfoyle, Donald Trump Jr., President Trump and first lady Melania Trump.

President Donald Trump accepted the Republican Party’s nomination for a second term Thursday, joining a general-election contest against Joe Biden that he and his party cast this week as a crusade against left-wing ideology and violent social disorder, fought against the backdrop of a virus that Republicans largely described as a temporary handicap on the economy.

Trump misrepresented his own record on the coronavirus, part of a broader attempt to minimize his lapses in office and turn a harsh light toward Biden, the moderate Democratic nominee. The president also repeatedly accused his opponent and Democrats of failing to take on rioters, though Biden has condemned recent acts of violence, and of harboring designs to restructure the American economic system along socialist lines.

Trump, by contrast, adopted the role of a defender of traditional American values and an unbending ally of the police.

Much of the night was given over to unusually explicit rebuttals to Trump’s vulnerabilities: Seldom if ever has a political party spent so much time during a convention insisting in explicit terms that its nominee was not a racist or a sexist, and that he was, perhaps despite public appearances, a person of empathy and good character. Ben Carson, the lone Black member of Trump’s Cabinet, argued that people who call the president a racist “could not be more wrong.”

It was not only on matters of character that voters were asked to trust the assertions of Trump’s family members and political allies over their own perceptions of reality. On no subject was that dynamic more dominant than the coronavirus pandemic: With only a few exceptions, nearly every speaker who mentioned the virus sidestepped the scale of its devastation and what is likely to be a slow and painful recovery.

Several speakers, including Vice President Mike Pence, hailed Trump as a Churchillian leader in the most trying of times. It was an attempt — not through the deft deployment of facts but through sheer force of assertion — to persuade the majority of voters who believe Trump mismanaged the coronavirus crisis that, in fact, the opposite is true.

The very staging of the convention Thursday appeared designed to send a signal that the virus was a thing of the past, even as the U.S. death toll neared 180,000. Guests on the lawn were packed into rows of chairs in plain violation of social-distancing guidelines, and few face coverings were in evidence.

Trump spoke from a prepared text, reading an address that sounded less like one of his campaign-trail diatribes than a State of the Union-style recitation of his achievements and goals. Underscoring the scripted nature of the speech, Trump misspoke in a high-profile, symbolic moment: “I profoundly accept this nomination,” he declared, though the word in his prepared text was “proudly.”

Trump leveled numerous false or misleading attacks on Democrats, in some cases taking up claims that have already been debunked, like the assertion that Democrats declined to say “under God” during the Pledge of Allegiance at their convention last week and the baseless charge that Biden’s party wants to “demolish the suburbs.”

And extending a tension that defined much of the week, Trump again drove an inconsistent message on criminal justice, bragging of his own efforts to make the system more merciful while claiming that Democratic support for more lenient policies would result in hordes of criminals pouring “onto your streets and into your neighborhoods.”

“Joe Biden spent his entire career outsourcing the dreams of American workers, offshoring their jobs, opening their borders, and sending their sons and daughters to fight in endless foreign wars,” he said.

Trump chastised Biden for raising the possibility of future economic shutdowns in response to the pandemic, accusing him of seeking to “surrender” to the virus. Instead, Trump insisted once again that the economy and public schools must reopen swiftly, though public opinion polls have shown that most Americans are wary of a speedy return to life as usual while the virus continues to spread.

To applause, he recited some of what he described as some of his biggest accomplishments, speaking with particular passion about an issue that been central to his political identity: cracking down on immigration. “Today, America’s borders are more secure than ever before,” he said.

He boasted about his administration’s efforts to build a border wall, but did not mention how slow the work had been or that he had failed, as he promised in 2016, to get Mexico to pay for it. “The wall will soon be complete, and it is working beyond our wildest expectations,” Trump said.

On this and its previous three nights, the convention displayed Trump’s overpowering grip on the Republican Party, with his family members, staff members and political loyalists dominating the speaking roster, and once-prominent party leaders like Mitt Romney relegated to political exile for the apostasy of criticizing the president.

In just four years, Trump demolished what was once a small-government, free-trade ideological framework and replacing it with his own ethos of nationalism. Issues that once dominated Republican politics, like the national debt and the promotion of democracy and capitalism overseas, were unmentioned or barely mentioned. Subjects from which the party once recoiled, like trade protectionism, have become part of the core of its agenda.

While Trump has preserved elements of the traditional Republican agenda — cutting taxes, eliminating business regulations and appointing conservative judges — the issues that animate him most are those that strike at themes of national pride, sovereignty, race and immigration. And those themes are now the main thrust of the party’s message in the 2020 election.

Trump was introduced by his elder daughter, Ivanka Trump, who walked out to the song “I’m Still Standing” by Elton John. Standing at a lectern over the presidential seal, she offered a long and detail case for her father that was at once personal, political and stylistic.

“I know his tweets can feel a bit unfiltered,” said Ivanka Trump, who is a senior adviser to the president. “But the results speak for themselves.”

She presented him as being one of the first to grasp the threat of the coronavirus, reinforcing a revisionist theme of the convention. She portrayed him as a doting grandfather who was moved to tears upon learning about pandemic deaths. “Washington has not changed Donald Trump,” she said, to a crowd that burst into chants of “four more years.” “Donald Trump has changed Washington.”

The program Thursday night included an early appearance by Mitch McConnell, the Senate majority leader. In a speech that would not have been out of place at a Republican convention a decade or two ago, McConnell praised Trump but spent most of his time warning of Democrats’ liberal aspirations, sometimes casting them in outlandish-sounding terms.

The opposing party, McConnell said, wants to “pack the Supreme Court with liberals intent on eroding our constitutional rights” and to regulate “even how many hamburgers you can eat.” While he called for voters to support Trump, he also asked them to back Republican candidates running for the Senate, in a departure from the convention’s almost exclusive focus on the president. “We are the firewall against Nancy Pelosi’s agenda,” McConnell said of Republicans in the Senate.

Rudy Giuliani, the former New York City mayor, delivered an inflammatory speech maligning New York, a city from which Trump self-deported to Florida, and portraying the president as a bulwark against anarchy in cities.

“New Yorkers wonder, ‘How did we get overwhelmed by crime so quickly and decline so fast?’” said Giuliani, who forged a national reputation for the decline in crime in New York during his tenure, but was criticized for episodes of abuse of force by the police against Black men. “Don’t let Democrats do to America what they have done to New York.”

Giuliani called Biden a “Trojan horse” for others waiting to carry out a “pro-criminal” agenda.

Sen. Tom Cotton of Arkansas, a military veteran who is eyeing a 2024 presidential campaign, delivered a biting speech in a muted tone, contrasting what he called Biden’s long record of misjudgment in foreign policy against Trump’s sturdy leadership.

Jabbing at Biden for having supported international trade deals and avoiding confrontation with China, Cotton said the former vice president “would be as wrong and weak over the next four years as he has been for the last 50.” And Cotton, who has been a harsh critic of Black Lives Matter protesters, alluded derisively to a signature act of the racial-justice demonstrations as he rebuked Biden. “We need a president who stands up for America,” Cotton said, “not one who takes a knee.”

In a week when organizers presented a succession of Black speakers to challenge the idea that Trump was racist, Carson, the secretary of housing and urban development, offered one of the strongest defenses of Trump. “Many on the other side love to incite division by claiming that President Trump is a racist,” he said. “They could not be more wrong.”

Carson invoked the Rev. Jesse Jackson, the longtime civil rights leader and a former Democratic presidential candidate, to attest to the president’s bona fides. He noted that Jackson once gave Trump an award for promoting economic opportunities for Black people.

Although the Republican convention lacked a cohesive theme, it consistently sought to treat Biden as a threat to traditional American society, and to emphasize the need for a president who sternly enforces public order and is closely aligned with the police. The party has taken up law and order as perhaps its primary political cause in recent months, after the killing of George Floyd in May led to a sweeping national protest movement against racism and police brutality, and in some cities spilled into scenes of vandalism and arson.

That continued Thursday as the fallout over the shooting of Jacob Blake unfolded in the Midwest.

Kellyanne Conway, the outgoing White House aide who spoke at the convention Wednesday night, suggested in unusually plain terms on Fox News on Thursday morning that she regarded scenes of public disorder as politically useful.

“The more chaos and anarchy and vandalism and violence reigns,” Conway said, “the better it is for the very clear choice on who’s best on public safety and law and order.”

Both Biden and his running mate, Sen. Kamala Harris of California, used appearances Thursday to condemn instances of rioting. In back-to-back television interviews, Biden said that Trump was deliberately “pouring gasoline on the fire” of social unrest for his own political purposes, citing Conway’s morning remarks as proof.

Hours before Trump appeared, Harris delivered a scorching preemptive strike on the president’s record on the crisis. Speaking in Washington, she criticized the Republican convention for having minimized the virus, saying the event was “designed for one purpose: to soothe Donald Trump’s ego.” Giving a point-by-point critique of Trump’s handling of the pandemic, Harris said Americans should recognize the cost of his errors.