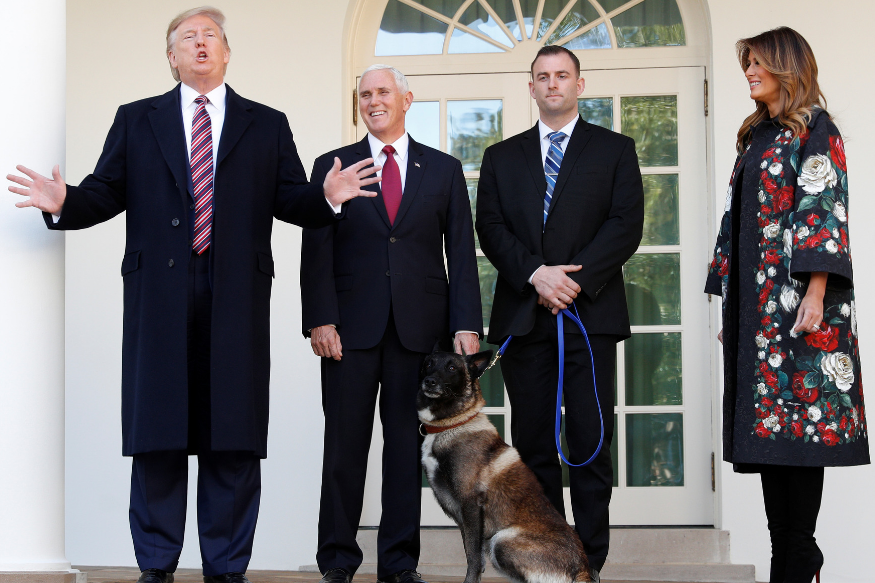 According to the US account of the raid on Baghdadi last month, Conan cornered the jihadist leader in a dead-end tunnel in his Syrian hideout, where Baghdadi detonated a suicide vest, killing himself and two children. Trump speaks to the news media next to Vice President Mike Pence and Conan, the U.S. military dog

Washington: “So this is Conan — right now, probably the world’s most famous dog.” In a stream of superlatives, Donald Trump introduced to the world the military dog involved in the raid that led to the death of Islamic State group leader Abu Bakr al-Baghdadi.

“Conan did a fantastic job,” the US president told the White House press corps, assembled for a brief, unannounced ceremony with the Belgian Malinois and its handler on Monday.

“So brilliant, so smart,” said Trump, joined for the event by First Lady Melania Trump and Vice President Mike Pence who lavished fulsome praise of his own on the four-legged “hero.”

“The dog is incredible,” Trump continued. “Conan is a tough cookie. And nobody is going to mess with Conan.”

According to the US account of the raid on Baghdadi last month, Conan cornered the jihadist leader in a dead-end tunnel in his Syrian hideout, where Baghdadi detonated a suicide vest, killing himself and two children.

Conan was injured by the electric cables exposed in the detonation but appeared to have made a full recovery.

“Conan was very badly hurt, as you know,” Trump told reporters. “They thought maybe he was not going to recover. He recovered actually very quickly and has since gone on very important raids.”

“I love this dog,” declared the president, saying Conan had been awarded a “medal and a plaque” for its service.

The US president — who ended a tradition going back more than a century by not having a dog in the White House — has made much of Conan’s role in the raid. Trump had highlighted the dog’s injuries when he initially announced the high-profile October 26 operation.

He went on to declassify the military dog’s identity — a closely guarded secret — by retweeting its picture. And he went as far as publishing a photoshopped image of himself bestowing the canine hero with the Medal of Honor, the country’s highest military distinction.