The tussle between BJP and Shiv Sena power over 50-50 power-sharing formula ended in the declaration of President’s Rule in Maharashtra last week. 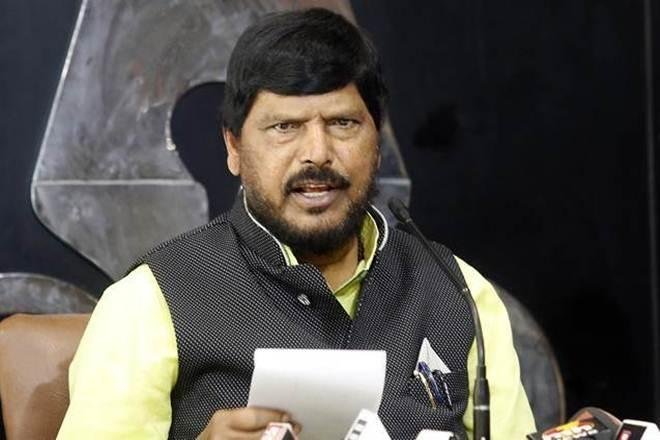 Ramdas Athawale says Amit Shah is confident that the BJP will form government in Maharashtra with the support of Shiv Sena. Express photo by Jasbir Malhi

Union Minister and RPI leader Ramdas Athawale has indicated that BJP president Amit Shah is confident that the party will form government with the support of Shiv Sena in Maharashtra despite a bitter tussle over sharing the power. Athawale said that he has asked Shah to mediate on the issue to find a way acceptable to all.

“I told Amit bhai (Amit Shah) that if he mediates then a way can be found out to which he (Amit Shah) replied ‘Don’t worry, everything will be fine. The BJP and the Shiv Sena would come together to form government’,” news agency ANI quoted Athawale as saying last night.

Athawale’s remark comes three days after Amit Shah accused the Shiv Sena of making unacceptable demands after the results. He had asked why the Uddhav Thackeray-led party did not oppose when the BJP leaders in the run-up to the elections were projecting Devendra Fadnavis as the next CM if the alliance wins.

“Before the elections, both Prime Minister Narendra Modi and I had said many times in public that Devendra Fadnavis will be the Chief Minister if the alliance wins. Nobody objected back then,” he had said. When Shah was asked about Shiv Sena’s claim that he had promised 50-50 formula to Uddhav in the presence of Fadnavis ahead of the Lok Sabha polls, Shah had replied, “It is not in our party’s tradition to disclose what transpires behind closed doors.”

The BJP and Shiv Sena contested the last month’s elections together. The alliance won a comfortable majority in the 288-member Maharashtra Legislative Assembly. While the BJP won 105 seats, the Sena bagged 56 seats. However, the Shiv Sena was adamant about its demand for a 50-50 power-sharing formula including the CM’s post, a demand categorically rejected by the BJP. The tussle ended in the declaration of President’s Rule in Maharashtra last week.