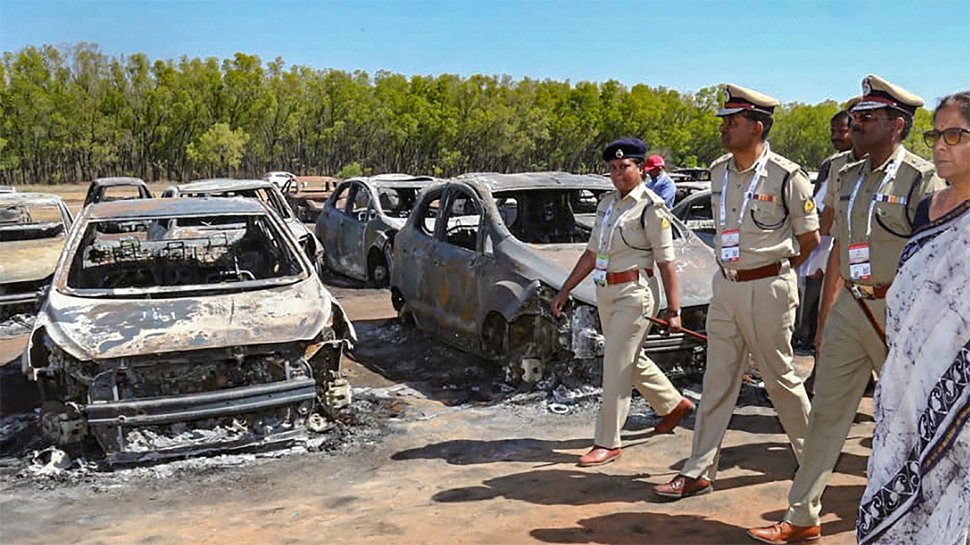 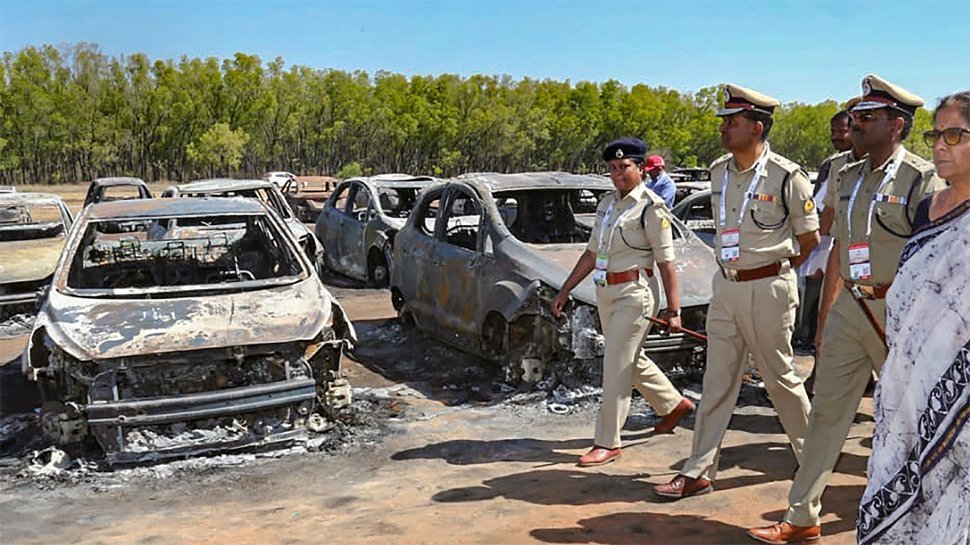 Bengaluru: An overheated silencer of a vehicle was the probable cause of the fire that gutted about 300 cars in the parking area of Aero India show in Bengaluru, Defence Minister Nirmala Sitharaman was informed by officials Sunday during her visit to the spot.

Sitharaman inspected the mishap site outside the Yelahanka Air Force Station, a day after the fire, and was briefed by the Indian Air Force officials, DG Fire Services and the head of Disaster Management Team about the incident, a Defence spokesman said.

A major fire swept through the parking area, far away from the venue of Asia’s premier air show, gutting about 300 cars on Saturday, but there were no casualties.

The five-day biennial air show went on unaffected by the fire incident, which came four days after two jets of Indian Air Force’s aerobatic team Surya Kiran crashed, killing a pilot a day before the opening of the event on February 19.

The fire brigade and Rapid Action Force and the National Disaster Response Force (NDRF) teams had doused the blaze in about 40 minutes after it was noticed around noon. The Indian Air Force has ordered a Court of Inquiry into the cause of the fire.

The officials, who briefed Sitharaman Sunday, told her that the probable cause of the mishap was fire from an overheated silencer of one of the parked cars and accentuated by strong wings, it spread quickly, the spokesman said.

Within minutes after the fire broke out, response was activated and there was quick assessment of the situation and joint planning by stakeholders, the spokesman said, adding some cars were broke open. The cars then were pushed out of the fire area to create an artificial break in the fire, he added.

As many as 77 vehicles were broken open, of which 16, were already on fire to an extent, he said.

A help desk with phone numbers 9480801415 and 080-22942536 had been set up under DCP (Law and Order) to help those who had lost their vehicles in the fire to get certificates for facilitating insurance claim, the spokesman said.

The survey of damaged vehicles by insurance companies was also being facilitated by the help desk, he added.

The Defence Ministry expressed its concern and sympathy towards visitors who lost their vehicles in the accident.