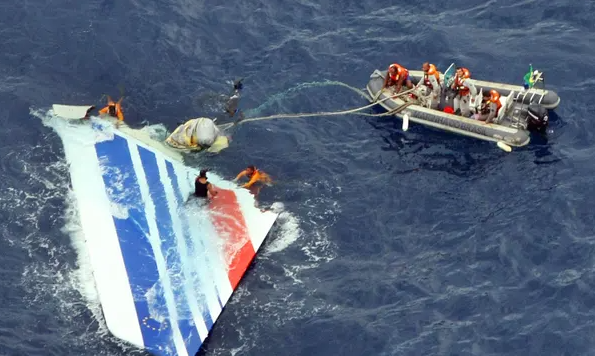 The harrowing final minutes of the Air France flight from Rio de Janeiro to Paris that went into freefall and plunged into the Atlantic Ocean in 2009, killing all 228 people on board, will be examined as a landmark trial opens in Paris on Monday.

Two aviation industry heavyweights – the airline Air France, and the aircraft maker Airbus – are being tried on charges of involuntary manslaughter for what was the worst plane crash in the French airline’s history.

It is the first time French companies have been directly placed on trial after an air crash, rather than individuals, and families’ lawyers battled for years to bring the case to court.

The crash on 1 June 2009 shook the world of air travel when flight AF447 disappeared from radars as it crossed the night sky during a storm over the Atlantic between Brazil and Senegal. The Airbus A330 had vanished without a mayday sign.

Days later, debris was found in the ocean, but it took nearly two years to locate the bulk of the fuselage and recover the “black box” flight recorders. The unprecedented French search effort involved combing 17,000 sq km of ocean bed at depths of up to 4,000 metres for over 22 months.

The plane had been carrying 12 crew members and 216 passengers from 33 different nationalities, all of whom were killed.

Planes most often crash on land and the AF447 ocean crash came to be seen as one of a handful of accidents that changed aviation. It led to changes in safety regulations, pilot training and the use of airspeed sensors.

The trial will hear extensive detail from the final, fatal minutes in the cockpit as the confused captain and co-pilots fought to control the plane.

As the plane approached the equator on its way to Paris, it had entered a so-called “intertropical convergence zone” that often produces volatile storms with heavy precipitation. As a storm buffeted the plane, ice crystals present at high altitudes had disabled the plane’s airspeed sensors, blocking speed and altitude information. The automatic pilot functions stopped working.

The 205-tonne jet went into an aerodynamic stall and then plunged.

“We’ve lost our speeds,” one co-pilot is heard saying in the flight recordings, before other indicators mistakenly show a loss of altitude, and a series of alarm messages appear on the cockpit screens. “I don’t know what’s happening,” one of the pilots says.

The historic trial will consider the role of the airspeed sensors and the pilots.

Daniele Lamy, president of the victims’ group, Entraide et Solidarité, told AFP: “We expect an impartial and exemplary trial so that this never happens again, and that as a result the two defendants will make safety their priority instead of only profitability.”

Air France and Airbus face potential fines of up to €225,000 – a fraction of their annual revenues – but they could suffer damage to their reputations if found criminally responsible.

Both companies have denied any criminal negligence, and investigating magistrates overseeing the case dropped the charges in 2019, attributing the crash mainly to pilot error.

That decision infuriated victims’ families, and in 2021 a Paris appeals court ruled there was sufficient evidence to allow a trial to go ahead.

“Air France … will continue to demonstrate that it did not commit any criminal negligence that caused this accident, and will request an acquittal,” the airline said in a statement to AFP.

Airbus, maker of the A330 jet that had been put into service just four years before the accident, did not comment before the trial but has also denied any criminal negligence.

From Italy to Sweden, Hungary to France, the far right is once again a force to be reckoned with. Its hostility towards immigrants encourages xenophobes everywhere, including in India. Its social conservatism threatens hard-won LGBTQ+ rights. Its euroscepticism has already upset the dynamics of the EU.

The normalisation of far right rhetoric has gone far enough. For decades, Guardian journalism has challenged populists like this, and the divisions that they sow. Fiercely independent, we are able to confront without holding back because of the interests of shareholders or a billionaire owner. Our journalism is always free from commercial or political influence. Reporting like this is vital for democracy, for fairness and to demand better from the powerful.

And we provide all this for free, for everyone to read. We do this because we believe in information equality. Greater numbers of people can keep track of the events shaping our world, understand their impact on people and communities, and become inspired to take meaningful action. Millions can benefit from open access to quality, truthful news, regardless of their ability to pay for it.

Every contribution, however big or small, powers our journalism and sustains our future.

Give legal rights to animals, trees and rivers, say experts