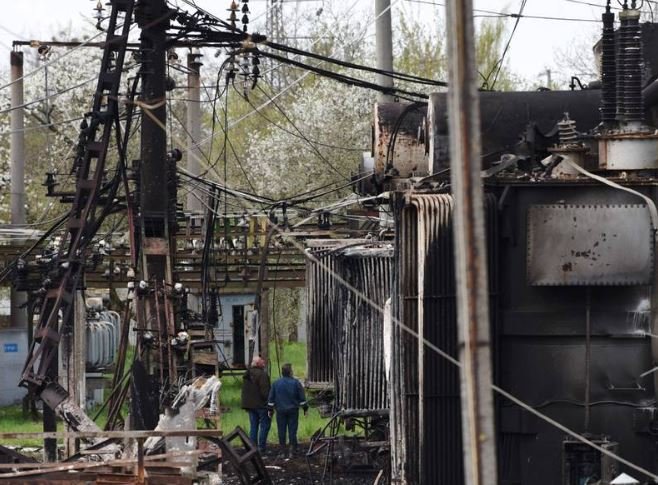 Russia is firing missiles at Ukrainian railways and supply routes in an attempt to foil weapons deliveries from western powers, officials on both sides say.

Ukraine said late on Wednesday that the city of Dnipro was hit by a missile aimed at railway infrastructure, a day after six electric substations serving rail lines were damaged in Russian strikes.

Russia said it attacked the railways because western arms and ammunition were being sent to Ukrainian forces by train. Defence Minister Sergei Shoigu complained that the West was “stuffing Ukraine with weapons.”

Ukraine’s allies have been scaling up their military support in recent weeks in response to pleas from Kyiv, with France, Britain, Germany and the US all offering advanced equipment such as tanks and lorry-mounted cannons.

The attacks on supply routes have stretched far beyond the eastern Donbas battleground where Russia’s ground offensive is concentrated, keeping other parts of Ukraine in the firing.

Ukraine, which accused Moscow of hampering evacuation efforts by damaging railway infrastructure, said it had drawn up alternative supply routes to protect its troops and other passengers from being hit by Russia’s rockets.

“Russia is trying to hinder the support of the whole free world,” said the Ukrainian government’s strategic communications command.

Ukraine said last week it had carried out a similar attack itself by blowing up a bridge near occupied Melitopol, cutting off one of two major railway lines from the annexed Crimean peninsula to the mainland.

Britain’s Defence Ministry said in a regular intelligence update that Russian strikes were aimed both at hampering supply efforts and weakening Ukraine’s resolve to fight the two-month invasion.

Non-military targets such as schools, hospitals and homes have continued to be hit, indicating willingness to strike civilian infrastructure to lower morale, the ministry said.

On the ground, Ukraine said Russia was seeking full control of the eastern Donetsk and Luhansk regions as the war entered its eleventh week.

It said Russia had shelled the city of Kharkiv and fired mortar and artillery at the city of Izium, regarded as a focal point of its offensive in the Donbas.

In Mariupol, the southern port nearly occupied by Russia after weeks of heavy fighting, Ukraine said another 344 people had been rescued and taken to the city of Zaporizhzhia.

President Volodymyr Zelenskyy said a ceasefire needed to hold for more people to be rescued from shelters under the Azovstal steelworks in the city. Russia is sceptical and claims foreign fighters are hiding there.