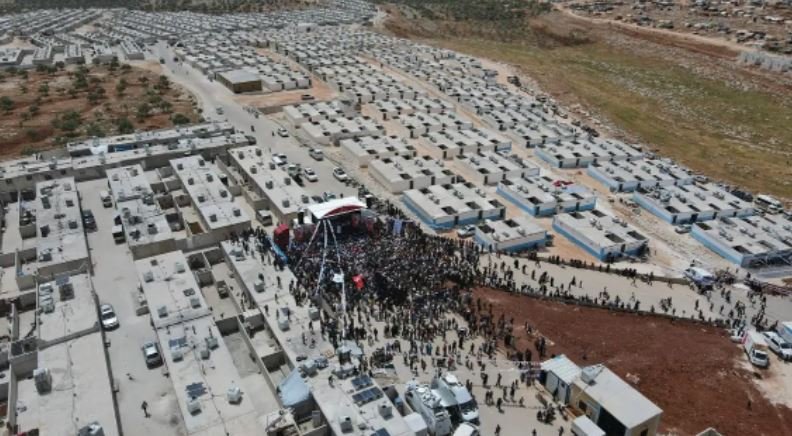 Turkish President Recep Tayyip Erdogan on Tuesday said Ankara was aiming to encourage one million Syrian refugees to return to their country by building them housing and local infrastructure there.

Turkey is today home to more than 3.6 million Syrian refugees, who fled after a civil war broke out in 2011 in Turkey’s southern neighbor.

Erdogan is facing rising public anger over the refugees’ presence and is wary of the issue dominating next year’s presidential and parliamentary elections.

“We are preparing a project for the return of one million of our Syrian sisters and brothers to their home country,” Erdogan said in a video address.

He said his government would work with international and local civil society organizations to reach the goal.

The video was broadcast to hundreds in Idlib, northwestern Syria, during a ceremony to hand out keys to houses that Turkey has constructed in the war-torn country’s north for displaced Syrians, an AFP correspondent said.

Erdogan said around 500,000 Syrians have returned to “safe zones” on the Turkey-Syria border since 2016.

Turkey plans to encourage more to return by building more houses for the returnees inside Syria.

“We will carry out this project with 13 local assemblies in the region, especially in Azaz, al-Bab, Tal Abyad and Ras-al Ayn and it’s pretty comprehensive,” Erdogan said.

Under the project, Turkey will also help build a school and a hospital to serve those returning, and help with infrastructure needed by the local economy, “from agriculture to industry.”

Speaking to a jubilant crowd waving Turkish flags, Soylu said Turkey would continue to support Syrians and at least 100,000 homes would be ready by the end of 2022 in the region.

Turkey has welcomed nearly five million refugees in total including Syrians and Afghans but their presence has caused tensions with locals, especially as the country suffered an economic crisis last summer.

Civil society associations and aid groups fear refugees will be used as a scapegoat for the country’s problems in the 2023 electoral campaign as Erdogan faces an angry populace.

Several opposition parties regularly call for the return of Syrian refugees to their home country.

Turkish officials in mid-April banned Syrian refugees from temporarily visiting Syria to see their families for the Eid al-Fitr holiday in early May, which marked the end of the holy month of Ramadan.

Erdogan’s junior nationalist alliance partner, the MHP, said any refugee who returned to Syria for the holiday should not be allowed to enter Turkey again.