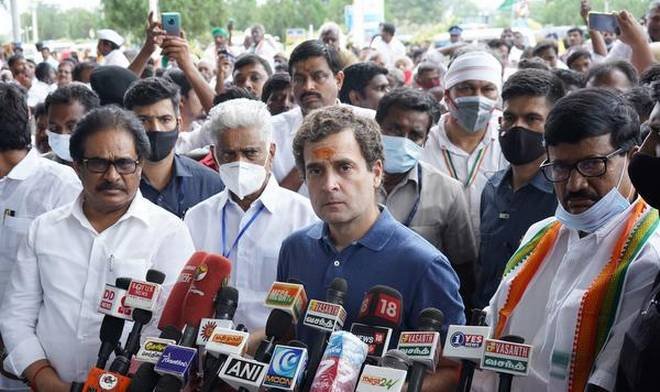 He made the remark on Pongal day “Mark my words … these (farm) laws… the Government will be forced to take them back, Remember what I said!” A short video clipping of Congress leader Rahul Gandhi, making this statement in January last has gone viral on social media after Prime Minister Narendra Modi on Friday announced repeal of the three farm laws.
Mr. Gandhi said these words while talking to the media at Madurai Airport on Pongal Day after witnessing Jallikattu in nearby Avaniyapuram.
“His statement is now a prophecy. What he said from the soil of Madurai has turned into reality,” said Virudhunagar MP and Congress Whip in Lok Sabha B. Manickam Tagore. “Another significance is that he had made the statement against the Black laws on Pongal day, a harvest festival,” he added.

Mr. Gandhi was firm on the issue and his statement only revealed that, Mr. Tagore said adding that the farmers were very clear about their stand and the Congress backed them with conviction.

“It is not his stand on Farm Laws alone stands vindicated. His words of caution on COVID-19 outbreak and adverse impact of demonetisation had also turned out true,” Mr. Tagore said.

The MP gave full credit to the farmers and their unrelenting protest for the announcement on the repeal of the three laws.