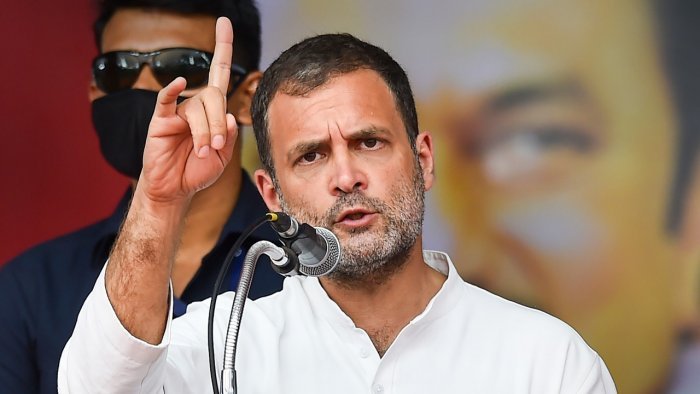 “Ironically, because of the money he has stolen from the people of Tamil Nadu, he (K Palaniswami) is now trapped,” the Congress MP alleged. K Palaniswami is forced to bow in front of Mr Shah because of the “corruption he has done”: Rahul Gandhi

Congress leader Rahul Gandhi on Sunday lashed out at AIADMK top leader and Tamil Nadu Chief Minister K Palaniswami alleging he is trapped due to graft and he bowed in front of Union Home Minister Amit Shah as he had indulged in corruption.

Addressing a public meeting here for the April 6 Assembly polls, Mr Gandhi said when he saw Prime Minister Narendra Modi ”controlling” the Chief Minister of Tamil Nadu and making him “touch his feet silently I am not ready to accept it.”

A “leader” in Uttar Pradesh was forced to bow in front of Mr Shah as he was corrupt and this person lost his freedom due to graft and Palaniswami too faced a similar situation, he claimed.

The former Congress party chief did not specify the name of the UP leader.

“The tragedy is, the Chief Minister of Tamil Nadu does not want to bow in front of Amit Shah and no Tamil person will want to do that.”

However, Mr Palaniswami is forced to bow in front of Mr Shah because of the “corruption he has done,” Mr Gandhi alleged.

“Ironically, because of the money he has stolen from the people of Tamil Nadu, he is now trapped,” the Congress MP alleged.

The Congress leader said he was angered to ”see” that Mr Palaniswami, belonging to the great Tamil civilisation, touched the feet of PM Modi and Mr Shah and bowed in front of them.

One has to touch the feet of Modi and Shah and bow before them, whether a person was in the BJP or in an alliance with that party, he claimed adding the party does not understand any other kind of relationship.

“We have a different idea, for us a relationship that is not equal is a useless relationship.”

Mr Gandhi, like in his previous poll campaign meetings in Tamil Nadu, reiterated that his party stood for mutual respect, love and affection and treated the Tamil people like brothers and sisters.

While the BJP wanted everyone in the country to ”bow” before Modi and Shah duo, the Congress party believed in the ethos of brotherhood and equality, he said.

He was for a relationship with the Tamil people that is equal, and respectful and also wanted the state to be run from Tamil Nadu and not Delhi, an oblique allegation that the BJP-led Centre called the shots in the state and not the AIADMK government.

However, they do not know understand that Tamils have not bowed in front of anyone in their history but had always reciprocated ”twice” love and affection showered on them.

Tamil Nadu is part of the very foundation of India, he said and also expressed his desire to learn Tamil.

While previous polls were contests between political parties of Tamil Nadu, the AIADMK and DMK, the present one was between the AIADMK, RSS, PM Modi, Mr Shah (BJP) on the one side and the Tamil people on the other side, he alleged.

The AIADMK-BJP front would be ”decimated” in Tamil Nadu in the poll battle and the DMK, its chief MK Stalin and his party-led Secular Progressive Alliance is the instrument that would steer the rout of AIADMK and its allies, he said.

Mr Stalin would become the Chief Minister of Tamil Nadu, he exuded confidence. “It is going to be a government that will not be controlled by Delhi.”

The ”attack” on Tamil Nadu shall, however, not end with Mr Stalin becoming the Chief Minister, he said, adding it shall happen only when the party was removed from power in Delhi.

Central to the idea of India is respect for all its languages, all people, all its traditions, he restated as in his earlier meetings.

He reiterated that democracy, Constitution and all independent institutions were under the attack and picked the three farm laws, demonetisation and the Goods and Services Tax to target the Central government.

US, China spar over world order during their first meeting under Joe Biden