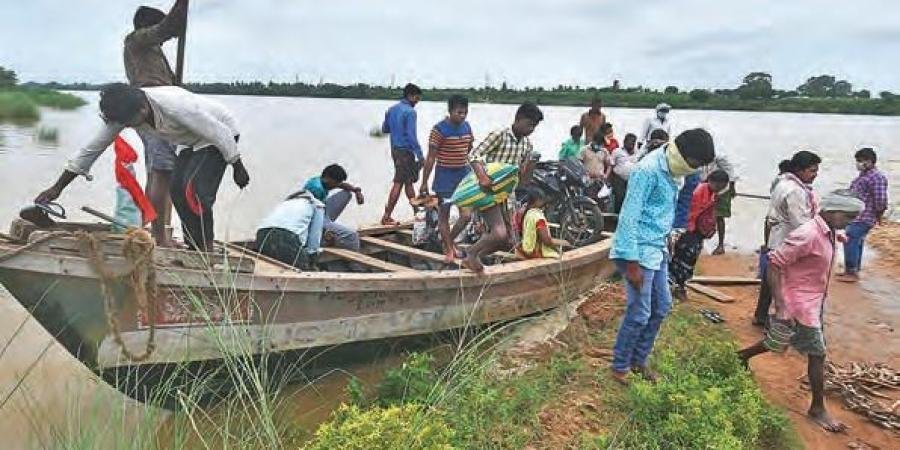 As the road leading to Pamula Lanka is submerged in water, villagers use a mechanised boat to go to the other side of a flooded stream near Vijayawada.

VIJAYAWADA: With heavy rains lashing the district for the last three days, water level in Krishna river near Prakasam Barrage has been increasing steadily.As on Sunday, while inflows to the barrage stood at 1.35 lakh cusecs, outflows were close to 1.20 lakh cusecs.

As such, people living in low-lying areas in Vijayawada, such as Krishna Lanka and Ramalingeswara, are fearing that the swollen river may enter their home. The district administration, too, has strongly advised them to vacate their houses and move to safer locations.

“It has become a routine affair for us to vacate the locality when floodwater is released downstream of Prakasam Barrage. A team of officials from the Vijayawada Municipal Corporation came and asked us to relocate. How can they do so when there is a pandemic around? Where will we go? The authorities must rehabilitate us before releasing floodwater,” observed Paidi Durga Rao, a resident of Balaji Nagar Katta.

Several streams were flowing at danger levels since the morning, paralysing normal life as roads in Nandigama, Mylavaram, Kanchikacherla, Penuganchiporlu, Chandarlapadu Nuzvid, Challapalli and Gudivada were inundated in knee-deep water.

Revenue officials estimated that thousands of acres of paddy, chilli and cotton crops in Sengapadu, Venganayukunipalem, Venkatapuram, Subbavaram and other villages were damaged due to the release of water.

A bridge near Lingala was inundated bringing the traffic between Hyderabad and Vijayawada to a standstill.

In Pallamgiri of Nandigama, personnel of NDRF’s 10th battalion rescued five persons stuck in Munneru Vagu. Among them, two were minors who were stuck with P Nagaraju (45) in a mango orchard. Two locals—Y Lakshamaiah (55) and Y Subba Rao (25)—who went to rescue them also found themselves trapped.

The NDRF men came in action after receiving the information from Nandigama tahsildar around 5.10 am.

A group of 26 personnel, led by assistant commandant DN Singh, reached the spot around 7.15 am and rescued the five in boats. At Kudali Damuluru in Nandigama, Vyara and Kataleru streams were flowing at danger levels, obstructing the vehicular movement between Nandigama and Veerulapadu mandals.

As on Sunday evening, Prakasam Barrage, with inflows from Munneru, Paleru, Wyra and other rivulets, in Vijayawada was getting 1.56 lakh cusecs and officials lifted all 70 gates to regulate the flow. About 1.32 lakh cusecs (as of 8 pm) of surplus water was being let down the barrage.

Andhra Pradesh State Disaster Management officials said first and second warnings will be given if the flow surges to 3.96 lakh cusecs and 5.66 lakh cusecs, respectively.

According to the officials, the rising trend is likely to continue for two more days.