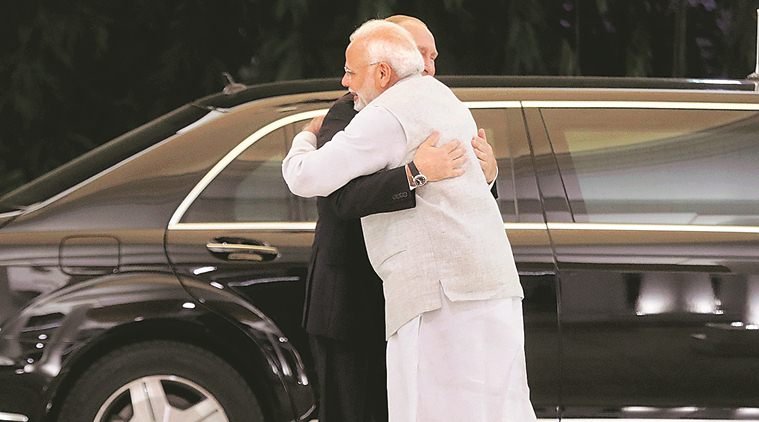 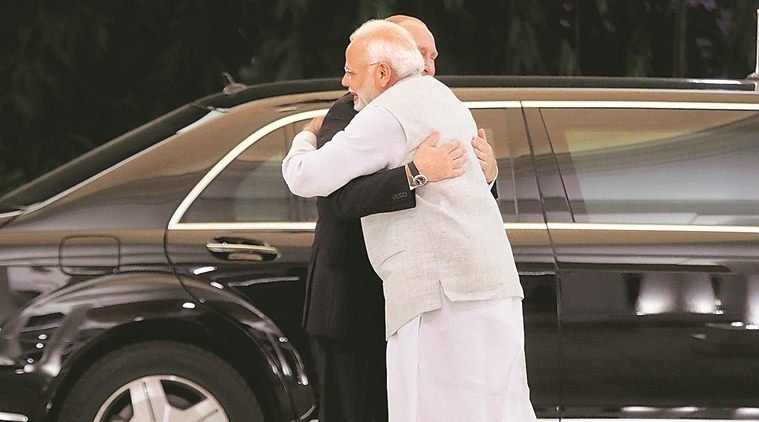 Carrying forward the Sochi spirit, Prime Minister Narendra Modi on Thursday had a one-on-one dinner meeting with visiting Russian President Vladimir Putin, accompanied only by interpreters. The meeting comes four-and-a-half months after the informal summit between the two leaders in the Russian city of Sochi.

Much like the two leaders spending about six hours in conversation in Sochi in May, Modi and Putin are learnt to have discussed a range of “strategic issues” concerning the bilateral relationship, sources said on Thursday.

While Putin’s aide Yury Ushakov had confirmed earlier this week about the signing of the S-400 air missile defence system, Indian government sources said that “indications” are that it will be done.

“We will have to see whether a deal will be signed, or an MoU, or will be reflected in the joint statement. We will have to wait for tomorrow,” a source told The Indian Express. This deal may attract economic sanctions from the US under CAATSA, since US President Donald Trump is yet to certify the deal.

On Friday, the two leaders are expected to have restricted conversation again, with a handful of aides, where they are likely to discuss nuclear, defence and security issues. This will be followed by delegation-level talks, where the leaders will discuss, trade, economic, energy, people-to-people issues. “But, since they have a rapport, this agenda is flexible,” a source said.

Putin arrived in New Delhi on Thursday evening for a two-day official visit, and was received by External Affairs Minister Sushma Swaraj. “Welcome to India, President Putin. Looking forward to our deliberations, which will further enhance India-Russia friendship,” the PM tweeted in Russian and English.

Putin, along with Modi, will hold the 19th India-Russia annual bilateral summit during which they are expected to review bilateral defence cooperation in the wake of the US sanctions against Russian defence majors. The two leaders are likely to discuss broad aspects of a joint project in Afghanistan, which was agreed in Sochi. They are also likely to discuss certain issues of crucial importance, especially Russia’s proximity to Pakistan.

As in the past, New Delhi is expected to raise the issue of countering terrorism and Pakistan supporting terrorists.

Sources said the two leaders spent a lot of time in Sochi, and there is a broad understanding between them that this is “not a transactional relationship”. “Both leaders are looking at a long-term, sustained relationship and how to make progress,” a source said, signalling that India will not come under pressure from the international community on cutting ties with Russia.

“The two leaders share lot of chemistry, that was evident when Putin — impromptu — decided to come to the Sochi airport to see off Modi,” a source said.

Sources said the two leaders are also likely to discuss the fallout of Donald Trump’s decision to pull out of the JCPOA between P-5+1 and Iran, and its impact.