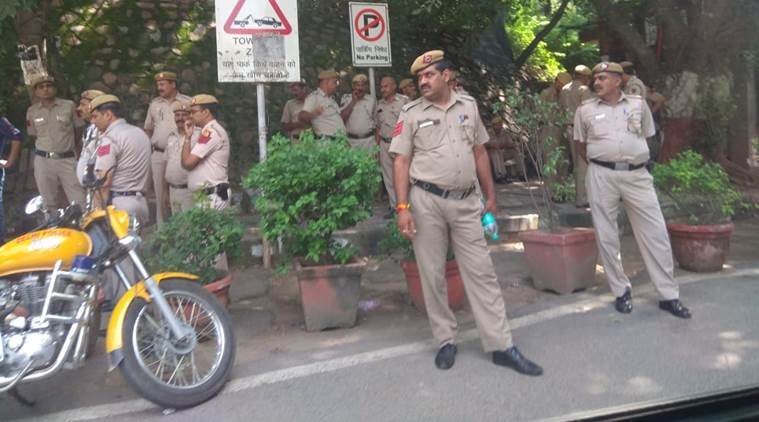 “I was called to the scene at Sutlej Hostel. As elected JNUSU president, I went to ensure Pawan Meena’s (AISA activist) safety who was attacked by ABVP students with sticks. Upon reaching, what I saw was mayhem. The mob led by Saurabh Sharma (former JNUSU joint secretary from ABVP) was baying for the blood of any student who they thought was a friend of Pawan Meena, and were attacking students with sticks.”

“They openly threatened me, (outgoing JNUSU president) Geeta, and other students present there with dire consequences if we intervened to stop the violence. The group turned into a mob and started attacking Abhinay, a former JNU student, in Jhelum hostel, chased him and attacked him. I ran with other students to save Abhinay who by then had fallen unconscious. We then took him to an ambulance and sent him for medical aid,” Balaji said.

Balaji was at Vasant Kunj North police station Monday morning to file a complaint in the matter. The newly elected office-bearers mobilised crowds in the campus to march to the police station to ensure an FIR was lodged.

The ABVP, however, said three of their activists had been assaulted.

“Just a while ago, three JNU students affiliated to ABVP were attacked by the criminals hiding as champions of Communist ideology. Around 15-20 Left workers, including non-students, were attacked in a targeted manner. They were led by Geeta Kumari and her friend Ankit Singh. They entered Sujal Yadav’s room, punched him and hit him with sticks. The left party workers had already fractured his hand yesterday. He has been attacked for the second time in 30 hours,” said Monika Chaudhary, ABVP national media convenor.

“The targeted violent attacks by the Left on ABVP students is a clear sign of an evil design unfolding in the campus. AISA-SFI and their allies have decided to turn things ugly in the JNU campus. Left wants turmoil in the campus… Left organisations are turning more and more aggressive and violent. In the present circumstances, the safety of the students, especially of those who are affiliated with ABVP, is in grave danger,” she said.