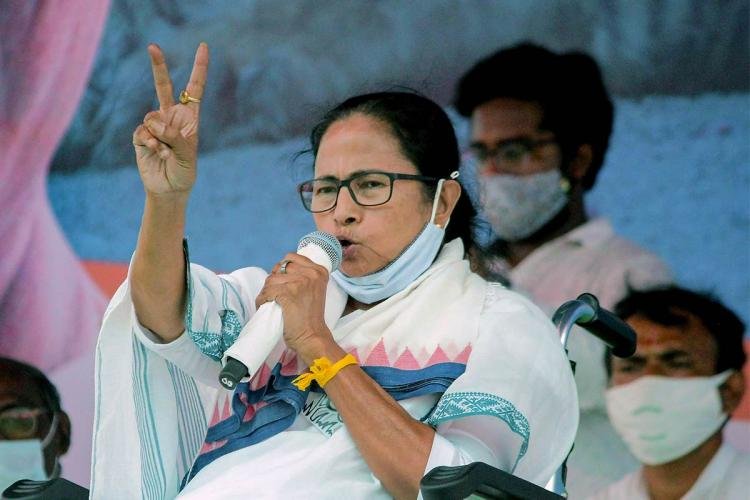 ‘Victory of country, victory of Bengal’: Mamata Banerjee on TMC’s win over BJP

The EC had reportedly declared Mamata as the winner from Nandigram and later changed its verdict, for which she said she would go to court. Incumbent West Bengal Chief Minister Mamata Banerjee hailed her party, the Trinamool Congress’s (TMC) victory in the Assembly polls on May 2. “This is the victory of Bengal,” she said, speaking for the first time on the day of the results, adding the results were a victory for the rest of the country too. The TMC’s win is significant as Prime Minister Narendra Modi and Union Home Minister Amit Shah, among other heavyweight BJP ministers from the Union government and several states had descended on West Bengal over the last two months. There were also allegations made against the Election Commission, accusing it of extending the election over eight phases to favour the BJP even as COVID-19 cases in the state were on the rise.

At the time of writing, the Election Commission of India website showed the TMC to win 213 seats, while its closest rival BJP was poised to win 77 seats.

Speaking on her closely contested fight in Nandigram, where the Election Commission had reportedly declared her as the winner and later changed the verdict, Mamata said she will go to court against the EC. “I accept the verdict. But I will move the Court because I have information that after the declaration of results there were some manipulations done and I will reveal those,” she told reporters.

She also asked all her party supporters not to celebrate in light of the second wave of the coronavirus pandemic in India. In the video which was aired live from her official Facebook page, she said, “I request you, don’t conduct victory rallies. This is not the right time. I will speak to the press. Then we will decide on the issue.”

“Please maintain all protectionary measures for COVID-19. You have all worked hard. Please go back to your homes, take a bath. Everybody must wear masks and we have to prioritise on handling and working towards COVID-19 management,” she told supporters gathered near her residence and party headquarters.

Addressing reporters shortly after that, she demanded that the Narendra Modi-led Union government vaccinate every Indian resident for free. She said, “We will give free vaccines to everyone.”

Earlier in the day, with the TMC’s victory imminent in West Bengal, congratulations poured in for the party president. “Congratulations @MamataOfficial didi for the landslide victory. What a fight! Congratulations to the people of WB,” tweeted Delhi Chief Minister Arvind Kejriwal.

“Congratulations @MamataOfficial on your stupendous victory! Let us continue our work towards the welfare of people and tackling the pandemic collectively,” Pawar said in a tweet.

Samajwadi Party chief Akhilesh Yadav in a tweet congratulated the people of the state for being “conscious” and hailed the workers’ efforts in defeating BJP’s “politics of hate”.

“Hearty congratulations to the conscious public, the combative Ms. Mamta Banerjee ji and the dedicated leaders and activists of TMC, who defeated the politics of hate of BJP in Bengal!

“This is a befitting reply given by the public to the insulting sarcasm ‘Didi O Didi’ by a woman from the BJP,” he said.

“Congratulations to the Chief Minister of West Bengal, @MamataOfficial Didi on her partys victory in West Bengal assembly elections. My best wishes to her for her next tenure,” the senior BJP leader tweeted.