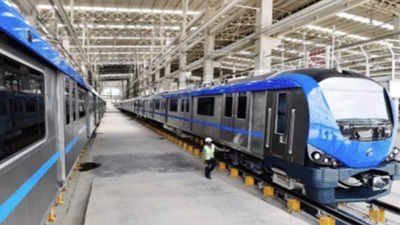 CHENNAI: Chennai Metro Rail Limited (CMRL) set in motion the state’s plan for a mass rapid transit system (MRTS) in Madurai. The agency recently floated a tender to assign a consultant for preparing a feasibility study.

During the Budgest session earlier this year, the government said a feasibility study would be conducted and a report submitted for establishing a metro rail network in Madurai. The firm assigned to conduct the study may have to submit the report in 120 days.

Officials said the study would involve identifying routes along which the modern transit network would be built and analyse the feasibility of establishing a metro rail network or any other alternative option based on passenger traffic movement and travel demand.

According to tender documents, the consultant assigned will have to examine available reports of previous studies, plans, CMP report and other related transportation scenarios of Madurai metropolitan region, collect primary transport network inventory data along with utilities within the project influence area. The consultant may also have to collect all secondary information like development plans, public transport routes and conduct a review of the current situation to establish the existing condition and capacity of the public transport system.

The effort to build a mass transit system in Madurai comes at a time when the government has set a deadline for CMRL to complete the 118.9km phase-2 network in Chennai by December 2026.

Tamil Nadu Chamber of Commerce and Industry, which is among the industry bodies that have been pressing for the Madurai metro rail project, welcomed the move. “It should connect all four directions from Melur to Thirumangalam and from Thirupuvanam to Checkanurani to cater to the growing needs of the congested city at least for the next 20 years at par with the city’s master plan,” its president N Jegatheesan said.