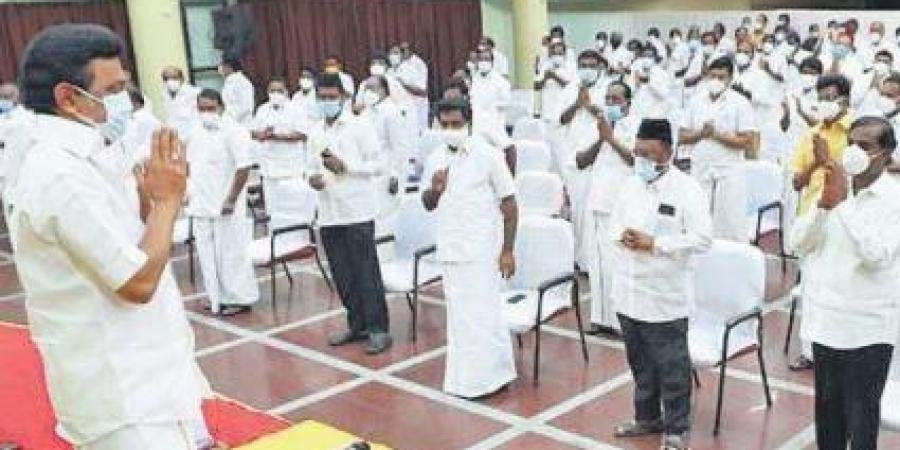 MK Stalin has been formally elected as DMK’s legislative party leader by its new MLAs, just ahead of forming the government.

CHENNAI: MK Stalin has been formally elected as DMK’s legislative party leader by its new MLAs, just ahead of forming the government. A meeting was convened at the DMK party headquarters on Tuesday evening, to choose the floor leader of the party — who will eventually take charge as the Chief Minister of the State. A total of 133 MLAs took part in the meeting — 125 from DMK, 4 from MDMK, 2 from MMK, and one each from KMDK and TVK.

All of these legislators contested on DMK’s ‘Rising Sun’ symbol, and will be considered as DMK MLAs in the Assembly. DMK general secretary Duraimurugan proposed Stalin’s name for the party legislative leader post, at the meeting. He was then elected unanimously.

Party sources said that Stalin would meet Governor Banwarilal Purohit on Wednesday, and stake claim to form the government. He will assume charge as Chief Minister on Friday, following a formal invitation from the Governor. Stalin, after being elected as a legislative leader of the party visited the mausoleums of former Chief Ministers CN Annadurai and M Karunanidhi and paid floral tributes to the departed leaders.

He also urged IAS officers, deployed as monitoring officers to supervise the Covid-19 measures, return to their respective districts, and ensure that all medical facilities are provided to patients from the districts. He exhorted authorities to strictly implement new restrictions, which will come into force from Thursday. He asked the officials to ensure availability of beds, and medical oxygen facility to patients.

Journalists are frontline workers: MK Stalin
Chennai: Chief Minister-designate MK Stalin on Tuesday declared that journalists, including those in print, TV and radio, will be considered as frontline workers since they put their lives at risk while working, when the pandemic is at its peak. In a statement, Stalin highlighted the service of media on bringing out the news and generating awareness among the masses. Various media houses welcomed the decision