The hospital had 35 staffers on duty at time of incident. The maintenance staff began searching for the source of smoke in the hospital and the nursing staff began the evacuation process, said CEO Dr Hafeez Rehman. The entire mall, at that point, was deserted. 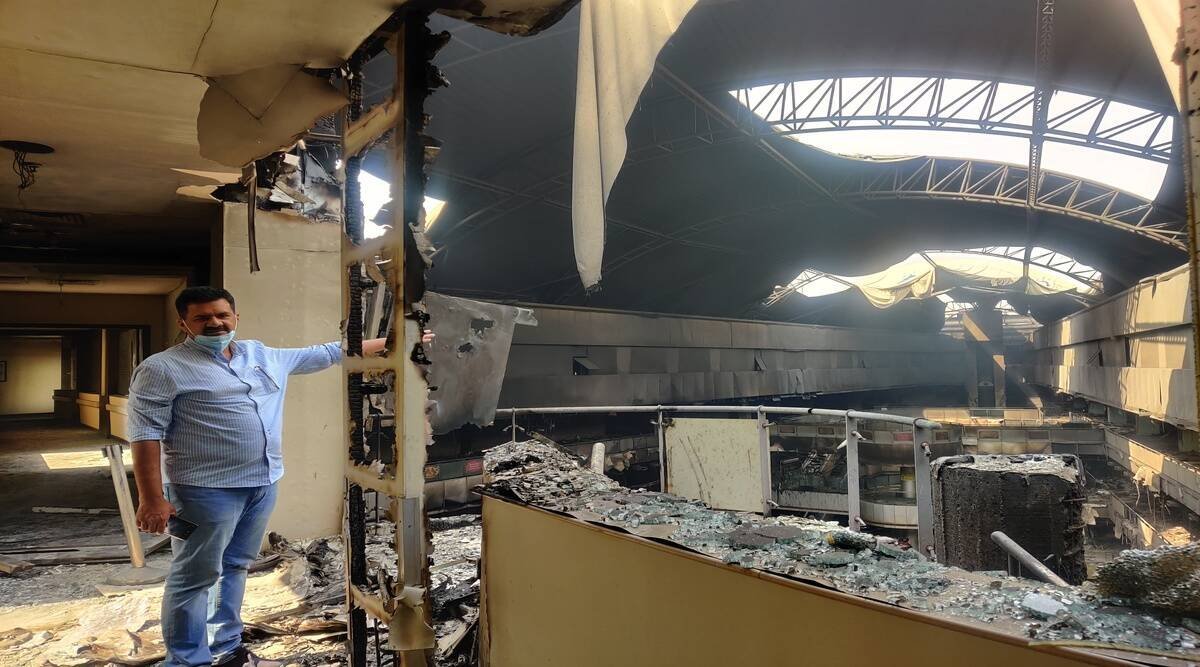 Dr Hafeez Rehman points to the window from where smoke entered from the mall.

CCTV FOOTAGE of the fire at Dreams Mall fire, which led to the death of 10 patients at Sunrise Hospital, shows that smoke first entered through the rear end of the hospital at 11.10 pm, where private VIP suites are located. The ICU, in which the majority of the patients who died were admitted, was only 25 metres from the point from which the smoke bellowed into the hospital.

The hospital had 35 staffers on duty at time of incident. The maintenance staff began searching for the source of smoke in the hospital and the nursing staff began the evacuation process, said CEO Dr Hafeez Rehman. The entire mall, at that point, was deserted.

Nurse Soni Sambhal, who helped rescue several patients, said she was recruited three months ago. “I live in the hospital premises itself.

After the fire alarm went off, there was so much smoke in the hospital that we could not see the person ahead of us. All we could do was take patients to the terrace,” she said. The staff of the hospital explained the difficulties that they faced in evacuating the trapped patients. “We could wheel out some patients but there were patients on high-flow oxygen support. It was impossible to separate them from the ventilator and nurses could not stay with them for long to ensure oxygen supply continued, as even they could not breath in the smoke,” an official said.

Hospital officials said ventilators continued to work on battery backup despite a power cut shortly before midnight. “But the smoke was so dense, it eventually made its way into the patient’s oxygen tube,” said Rehman. He added that the last fire drill was undertaken a week ago in the hospital.

There were 16 ICU patients admitted in hospital, and one patient was wheeled out on an ICU bed till the terrace.

When The Indian Express visited the hospital, the bed, along with a few wheelchairs, was lying on the open terrace, from where the Fire Brigade rescued many patients. On Saturday, thick soot-covered pillow covers and bed sheets were the only reminder left of the incident that had claimed 10 lives a day before.

“The staff did the best they could in the situation. They brought everyone out on the terrace. These were also Covid-19 patients and there is a natural apprehension about touching them,” said a senior fire official, who is part of the BMC probe.

Kaushal Chakravarthy, who was admitted in a regular ward along with his parents, said the staff in the hospital was new and seemed confused about whether to use the emergency staircase. “We all rushed to the terrace because that seemed the safest. It was only when the Fire Brigade arrived and said it was safe to use the staircase did we proceed towards it,” he said.

A probe under Deputy Municipal Commissioner P Rahangdale will look into whether there was a delay in the response to the fire, whether the hospital and attached mall had any lapses in the fire safety system, how the fire started and who was responsible.

Hospital authorities maintained that they had a NOC from the fire department in place and their fire fighting systems were operational.

Rahangdale said they will be reassessing all fire equipment and permissions granted to the hospital. A team from the Brihanmumbai Municipal Corporation also visited the hospital on Saturday morning.