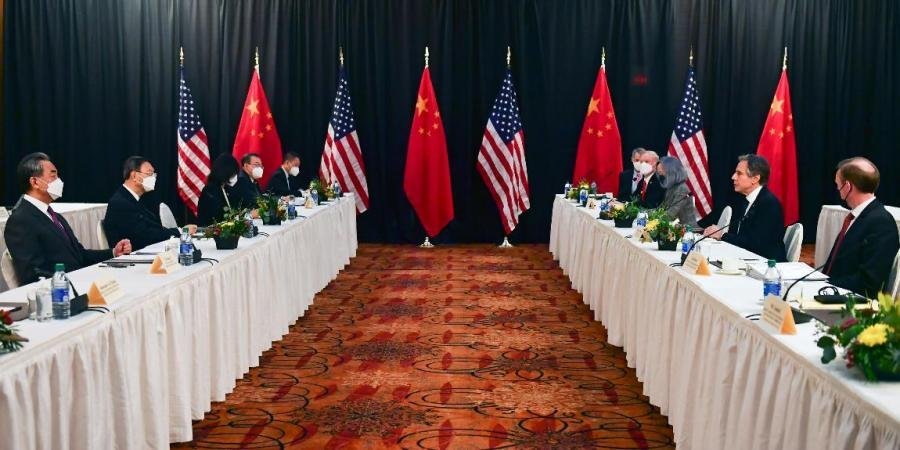 US, China spar over world order during their first meeting under Joe Biden

US Secretary of State Antony Blinken speaks to Chinese Communist Party officials at the opening session of US-China talks in Anchorage.

ANCHORAGE: US and Chinese diplomats clashed on Thursday in their first face-to-face talks since US President Joe Biden took office, with the world’s top two powers digging in on a laundry list of issues on which they diverge broadly as the meeting opened in Alaska.

China’s actions “threaten the rules-based order that maintains global stability,” US Secretary of State Antony Blinken said at the opening of the two-day meeting in Anchorage.

The US side will “discuss our deep concerns with actions by China, including Xinjiang,” where Washington has accused Beijing of “genocide” against Uyghur Muslims, Blinken told the Chinese Communist Party’s top diplomatic official, Yang Jiechi, and Foreign Minister Wang Yi.

He added that there would be dialogue on “Hong Kong, Taiwan, cyberattacks on the United States, economic coercion toward our allies.” Beijing was equally sharp in its response. “China is firmly opposed to US interference in China’s internal affairs. We will take firm actions in response,” Yang warned.

Wang denounced the latest US sanctions against senior Chinese officials over what Washington considers Beijing’s quashing of Hong Kong’s freedoms, announced on the eve of the talks. “This is not supposed to be the way one should welcome his guests,” Wang said.

Tensions between Washington and Beijing remain high after relations were pitched into turmoil during Donald Trump’s presidency, which saw a damaging trade war and spats over everything from defense to tech and rights in Hong Kong.

With its frigid temperatures and a remote, Pacific location, Anchorage was considered a more neutral meeting ground than Washington or Beijing for the three-session talks that finish Friday morning.

But expectations are limited on both sides and the tone set by the opening statement confirmed the depth of the divide between the rivals. Their last meeting in June did nothing to help thaw frosty relations.

Biden has maintained a tough line on China, and Blinken has said it represents America’s “biggest geopolitical test of the 21st century.” Still, the Biden team has said it wants to engage diplomatically on the world stage, in a pivot from Trump’s isolationist and ally-berating stance.

Visibly stung by the American accusations, he reproached the United States at length, demanding Washington “stop advancing its own democracy in the rest of the world.” “The vast majority of countries in the world don’t recognise US values as global values,” he said, according to a readout in Chinese state news agency Xinhua.

The two countries, Yang added, “share many common interests” including in the fights against COVID-19 and climate change. “I have to tell you what I’m hearing is very different from what you described. I’m also hearing deep concern about some of the actions your government is taking,” Biden responded

A senior Biden administration official in Anchorage accused the Chinese delegation of “grandstanding,” and said it was “focused on public theatrics and dramatics over substance.” After journalists were invited to leave the room, Chinese diplomats asked that they stay longer to witness the “condescending tone” of the Americans.

A senior American official later said that however the two sides then held a “substantive, serious, and direct” conversation behind closed doors. A second session began in the evening, with a third scheduled for Friday morning.

Thursday’s meeting follows a visit by Blinken to Japan and South Korea, two key US allies in Asia.  Blinken and Defense Secretary Lloyd Austin also attended a summit between leaders of the so-called “Quad”, which groups the US, Australia, Japan and India as a check on China’s ambitions.

Blinken and allies have criticized China on a slew of issues, including the erosion of autonomy in Hong Kong, tensions around Taiwan and Tibet, the treatment of the Uyghurs in Xinjiang, Beijing’s sweeping maritime claims in the South China Sea, the theft of intellectual property and a lack of transparency over the origins of COVID-19.

China, in turn, accuses the US of interfering in its internal affairs and seeking to stem its economic rise.

Elizabeth Economy, a senior fellow at Stanford University’s Hoover Institution, said that while the Biden administration has moved away from Trump’s inflammatory rhetoric, temperatures remain high.
“We are in a position where our core values and vision of a future world are fundamentally at odds,” Economy told AFP.