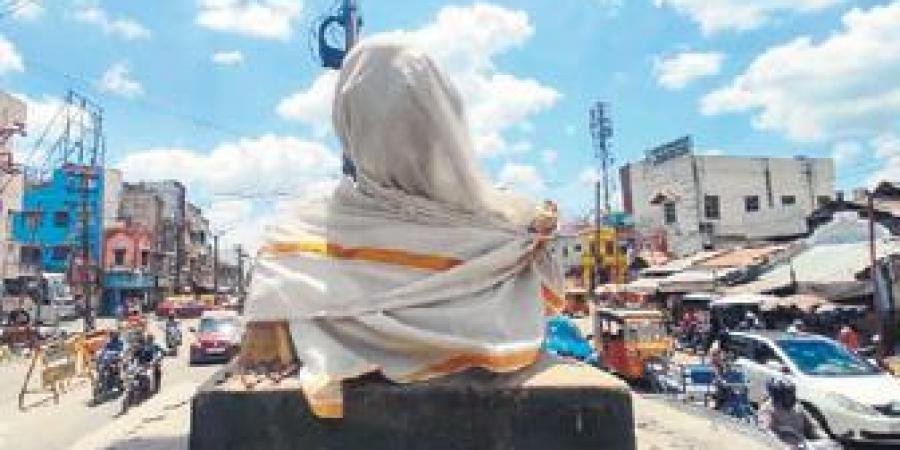 Madurai: Why is Mahatma ‘wrapped’ in politics?

He restrained himself from stepping on to the temple compound until all the people were allowed inside.

The Gandhi bust that was covered by election officials in Madurai

MADURAI: The line that separates nationalists and politicians has become a hot topic in Madurai all of a sudden as election officials, as part of implementing Model Code of Conduct (MCC), covered the statues of Mahatma Gandhi and Subhash Chandra Bose, sparking a controversy.

Claiming that there was no need for the officials to cover Gandhi statue, Director of Gandhi Museum, KR Nandha Rao, said that the Father of the Nation should be seen as a national leader beyond electoral politics.

“The particular statue in Yannikkal is, in fact, historically significant. Gandhi had visited Madurai five times. During his 1934 visit, he went to Meenakshi Amman Temple, only to learn that Dalits were not allowed inside. He restrained himself from stepping on to the temple compound until all the people were allowed inside.

After the Dalits entered the temple compound for the first time, Gandhi visited again in 1946. At that time, he stayed in ‘Sivaganga Palace’ which is now on Meenakshi College premises. The statue was originally erected near the college. It was later relocated to Yanaikkal, despite our protests, due to a bridge construction,” he said.

To cover periyar or to leave him in open?

Though the statue of Subhash Chandra Bose was also covered by the election officials, the public, later, removed the cloth. Sources said that when the statue of Periyar EV Ramasamy was covered during 2011 Assembly elections, the Madras High Court had ruled against it.

“The Election Commission had said earlier that only the statues of political leaders who are alive need to be covered. However, the Model Code of Conduct did not have any clear instructions on covering of statues,” they said.

Madurai Collector T Anbalagan said that the execution of MCC comes under the purview of the returning officers. However, he assured to inquire about the issue. Meanwhile, the cadre of Hindu Munnani staged a protest demanding the authorities concerned to cover the statue of Periyar at Palayamkottai bus stand.

State president of the party, Kadeswara C Subramaniam, said that Periyar is an important political figure in the State and like that of any other political leader, statues of Periyar should also be covered when the MCC is in effect.