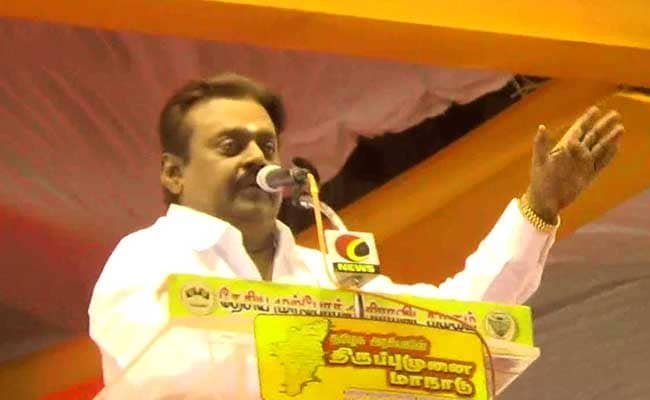 Tamil Nadu Elections: Tamil Nadu is set to vote next month for the state elections to be held in a single round on April 6; results will be out on May 2.

In a setback to the AIADMK-BJP combine in Tamil Nadu, actor Vijayakanth’s DMDK has walked out of the alliance ahead of the state polls next month.

After three rounds of discussions, the AIADMK “refused to allot the number of seats that were sought,” the party said.  On Friday, DMDK leader and former MLA Parthasarathi said the party wanted to contest 23 of 234 seats in the state assembly, and a Rajya Sabha seat. He claimed the ruling party gave only 15.

The DMDK, which has witnessed an impressive growth since 2003, witnessed a loss of vote share in 2016 state elections. In its first elections in 2006, the party secured only one seat with 8.4 per cent vote share. The party’s vote share touched 10.3 per cent in 2009 Lok Sabha polls; in 2011, it won 29 assembly seats from 41 it contested in alliance with the AIADMK. Vijayakanth had then become the leader of opposition.

In 2014, it contested 14 seats but could not win even one with a vote share of 5.1 per cent. Its decline continued in 2016 as it led the third front including Left, VCK and MDMK. The alliance suffered a rout with the DMDK’s vote share plummeting to 2.4 per cent. It returned to the AIADMK-led alliance in 2019, ahead of Lok Sabha polls but could not revive its fortunes.

Assembly polls will be held in Tamil Nadu in a single phase on April 6; results will be out on May 2. This is the first state election for the ruling AIADMK since the death of its charismatic and powerful leader J Jayalalithaa. The opposition DMK-Congress swept the 2019 national election; it’s hopeful of a “big win” in the state polls too.

In the 2019 Lok Sabha polls, the AIADMK-BJP alliance suffered a poll debacle, losing 38 of the 39 seats in the state. The BJP – optimistic about expanding its footprint in the southern states – had lost all five seats it contested.

Last week, the AIADMK allotted 20 of 234 seats to the BJP, three less than the 23 seats allotted to the other regional ally – PMK.  This was hours after the ruling party also announced its first list of six candidates that included top leaders including Chief Minister Edapaddi Palaniswami, Deputy Chief Minister O Pannerselvam. Mr Palaniswami, who continues to be the party’s face in the state elections, will contest from Edappadi constituency, while Mr Panneerselvam will contest from Bodinayakanur.

Among other key challengers in Tamil Nadu, actor-turned-politician Kamal Haasan’s party Makkal Needhi Maiam (MKM) will face its first state elections. On Monday, the MKM had announced contesting on 154 out of 234 assembly seats.

Elections will also be held in three other states – Kerala, West Bengal, Assam – and a union territory – Puducherry – from March 27.

More than 18 crore are eligible to vote in these elections, Chief Election Commissioner Sunil Arora said last month. This is the first major set of elections to be held in the middle of the coronavirus pandemic after the Bihar election.

Madurai to impose Rs 200 fine on those not wearing masks

Madurai: Why is Mahatma ‘wrapped’ in politics?