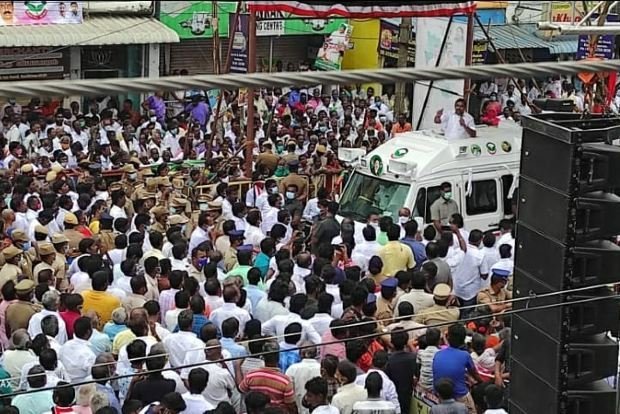 AIADMK top leader and Chief Minister K Palaniswami on Wednesday challenged DMK president M K Stalin again to have a debate with him on his allegations of corruption against the government and accused him of being power hungry.

Chief Minister EPS during his electoral campaign in Kanchipuram

In his campaign at nearby Sriperumbudur for the Assembly polls, likely in April, Palaniswami said the leader of the opposition was not ready to accept his challenge. “You (Stalin) should come without a paper slip to debate. You must not read out from a note prepared by someone else. List out your claims of corruption and I will answer,” he said.
The AIADMK has often mocked Stalin for ”depending” on paper slips to address people. Dismissing as ”lies”, the charges of corruption levelled by Stalin in a petition to Governor Banwarilal Purohit, the Chief Minister said he was ready to face the DMK leader and debate at any place to refute his allegations. The Chief Minister said though he had already (earlier this month) asked Stalin to turn up for an open debate, the DMK chief was not coming forward to accept his challenge. “A tender for a road work in Tirunelveli was cancelled about a year and a half ago. Even without knowing that, Stalin has made a false claim of Rs 700 crore corruption,” he said. In December, DMK had submitted a petition to Purohit, seeking action under the Prevention of Corruption Act and Palaniswami had then too said these were lies and defamatory in nature. Palaniswami said he considered “people as the Chief Minister,” and the job of a Chief Minister is to execute the orders of the people.
The DMK chief was however ”power-hungry” and irritated in his bid to become the Chief Minister and does not ”know” anything about the country, he alleged. Listing out his government’s ”achievements”, including bagging national awards in local administration, water management and education, he exhorted the people to vote for the ”two-leaves” symbol of the AIADMK. Unlike ”the DMK” which was for power to the ”family,” AIADMK had always been committed to people and this explained why people continued to venerate late leaders M G Ramachandran and J Jayalalithaa, even years after their death. The AIADMK has been targeting DMK over ”dynasty” politics. Accusing Stalin of ”dreaming” to capture power, Palaniswami said when he assumed office in 2017, the DMK chief claimed that the government would fall within 10 days, a month and so on.
The government has, however, been successful all along and “your present dream will never become a reality. Again it will be Amma’s rule in Tamil Nadu,” he said. Also, the Chief Minister said Stalin was deliberately engaged in a false propaganda against the government and wondered why the DMK president did not go to villages and interact with people when his party was in power. He accused Stalin of winning the 2019 Lok Sabha elections by ”deceiving” the people. “You are trying to do that again,” he said and added that if voted to power, only the family and not people, mattered for the DMK. To DMK’s charge that people did not vote in 2016 for him to become the Chief Minister, Palaniswami, in his repartee, said he became the CM after the demise of late leader J Jayalalithaa, similar to M Karunanidhi assuming office after the death of DMK founder C N Annadurai in 1969.