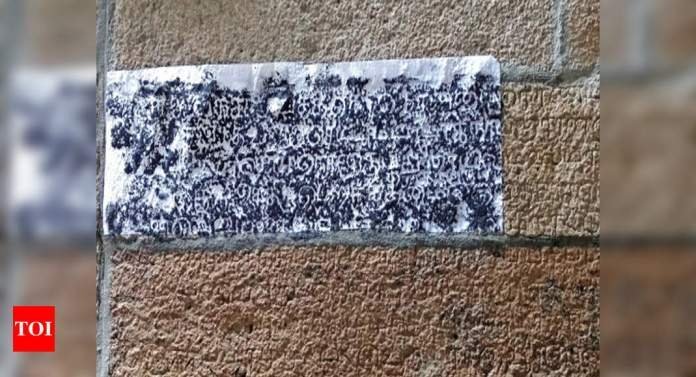 MADURAI: The Sri Meenakshi Sundareswarar temple structure, as it stands now, was constructed between 11th and 13th century AD and the deities were referred to as Meenakshi and Sundareswarar only after the 17th century AD, according to stone inscriptions in the temple which have been deciphered by archaeologists in detail.

A team led by retired assistant director of the state archaeology department, C Santhalingam, had been on this work commissioned by the temple administration since July 2019. In most of the stone inscriptions, the deity Lord Shiva is referred to as Thiruvalavudaiyar Nayanar and the goddess as Angayarkanni and Thirukammak Kottathu Aludaiya Nachiar, which literally means possessor of the temple. The goddess’s first reference to the name Meenakshi appears in a stone inscription pertaining to AD 1752. The name Sundareswarar for Lord Shiva appears in an inscription of 1898 AD.

Santhalingam told TOI that though the temple has been sung about in the Sangam era literature, there are no stone inscriptions available on its premises now pertaining to that period. Most of the 410 stone inscriptions they studied in the last one year pertained to the period between 12 and 13th century AD.

The team which included curator of Madurai Government Museum Dr M Marudhu Pandian and archaeological officer B Asaithambi has taken copies of 410 inscriptions within the temple and brought it out in the form of a book to be released shortly. The inscriptions were never completely read and there are only some references to them in the annual report on Indian epigraphy in Mysuru. They were partially read between 1935 and 1936 as well as between 1941 and 1942.

Among the 410 inscriptions, only 90 were available completely while 300 are fragmented and 23 are label inscriptions. A stone inscription that has no direct connection to the temple and pertaining to 700 AD is the first inscription in the book to be released. Popularly known as Vaigai bank inscription, it speaks about a check dam being constructed across the river. This is the oldest one found in the temple while all the others pertain to the later Pandiya period between AD 1190 and 1311.

He said the present structure was constructed in the 13th century AD and the shrines of the Goddess and God were built simultaneously. Many of the inscriptions talk about the land parcels donated for worship in the temple.
A stone inscription in the East tower of the temple speaks of a protest by 64 palanquin bearers.

The land given to them during the period of Vijayaranga Sokkanarthar was taken back, which they protested. When the administration refused to pay heed to their demands, one of the protesters had jumped off the tower and committed suicide, says the record.