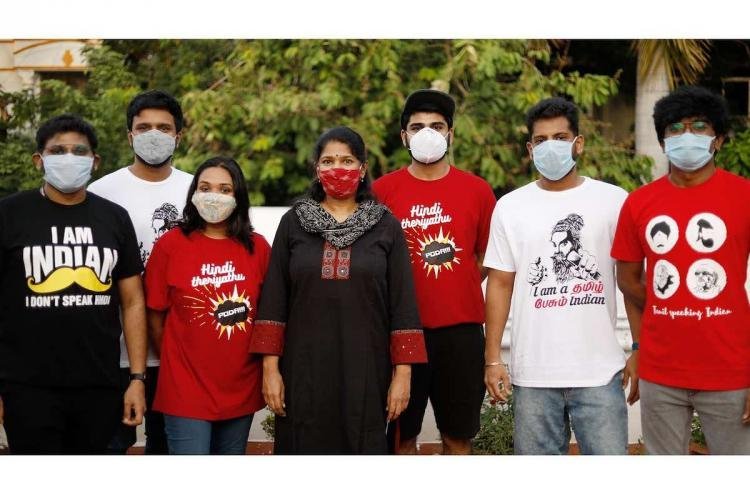 Social media has been abuzz with photos of youth in T-shirts carrying anti-Hindi and pro-Tamil slogans.

Amid the ongoing debate over the alleged imposition of Hindi, activists, politicians and the public alike in Tamil Nadu have expressed their displeasure by resorting to T-shirt sloganeering.

Social media has been abuzz with photos of youth in T-shirts carrying anti-Hindi and pro-Tamil slogans.

The rage started after musician Yuvan Sankar Raja and actor Shirish Saravanan shared a photo of them wearing T-shirts with slogans I am a Tamil pesum Indian (I am a Tamil speaking Indian) and Hindi theriyathu poda (I don’t know Hindi, go man).

Sharing the image, she wrote, ”A spark is enough to ignite a sentiment. When we printed Tshirts, in the era of blatant Hindi imposition, we didn’t know that the youngsters would respond passionately like our forefathers in fighting discriminatory practices. Thank you”.

In August this year, Kanimozhi alleged that a Central Industrial Security Force (CISF) constable at the Chennai Airport had questioned if she was an Indian as she didn’t know Hindi.

The move further re-ignited the ‘Hindi imposition’ debate in the state as Kanimozhi remarked that this was a ‘larger issue’ about people in positions of authority who, she said, didn’t know that both English and Hindi are official languages of the country.

Meanwhile, the new fad in the state has gone viral, as more and more people are joining the trend:

However, BJP spokesperson Narayanan Tirupathy questioned the trend and said, “Rather than saying I don’t know India it is good for a Tamil to ask people to learn Tamil. This is what the New Education Policy says and how will people who do not have the thought of spreading Tamil know this?”