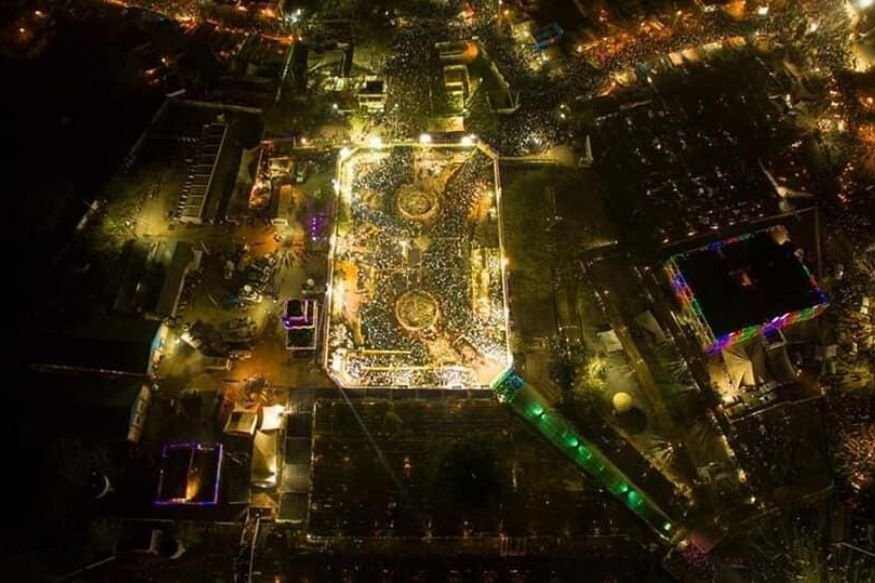 Telangana: Dubbed the state’s own ‘Kumbh Mela’, the ‘Sammakka-Saralamma Jatara’, is a biennial tribal festival, set to be celebrated from February 5 to 8 this year, in Medaram, Mulugu District. A crowd of approximately three crore devotees is expected to attend the event, said the Telangana government, which has made necessary arrangements for the same.

Celebrations for the Jatara start ten days prior to the main event. Idols will be brought by the tribes from different parts of the forest, created with bamboo and wood. On the first day of celebration, the idols of ‘Saralamma’, ‘Govinda Rajulu’, ‘Padigidda Raju’ will arrive on the stage.

On the fourth day, the idols will be sent back to the forest after religious formalities. Their worship is carried out with jaggery, treated as ‘gold’ by the pilgrims, who begin arriving at Medaram a month before the festivities commence.

The government has allotted around 1,500 acres for vehicle parking. The state tourism department has also arranged helicopter travel for Medaram Jatara. Apart from this, Indian Railways has also prepared itself for the incoming devotees.

“Our dreams will be fulfilled by goddess Sammakka. I got a job with her blessings,” said one young pilgrim Karthik, who will be donating jaggery worth his weight to declare his devotion.

The three-day festival will be followed by dinner and entertainment. Goats, sheep and chickens are sacrificed for the goddess. “Our entire 30-member family came to Jatara. We brought a goat with us,” said Kumar, a merchant from Kamareddy.

After the formation of Telangana, the Sammakka-Sarakka Jatara has gained wider fame than before. Apart from the local devotees, people from far-flung states also come to celebrate the event.

It is said that once, a few tribal people went out for hunting to the forest. There, they found a girl child playing with lions. Surprised, they took the child to their home and named her ‘Sammakka’, who grew up to display various miracles, and saved people in trouble. People also called her goddess of the forest.

In those days, Medaram was being ruled by the Kakatiya kingdom’s regent Pagidigidda Raju, who got married to Sammakka. The couple bore three children — Saralamma, Nagullamma and Jampanna. When the time came, Sammakka’s daughter Saralamma got married to Govinda Rajulu. Their relatively smooth life was interrupted after a few years when the village ended up facing severe drought and turmoil.

Since people could not pay taxes to Kakatiya rulers, who had suffered famine for three years, the government invaded tribal huts and extorted taxes.

The tribes fought against Kakatiya’s soldiers at the Laknavaram Lake near Mulugu. Pagidida Raju and his daughters Nagullamma, Saralamma and son-in-law Govinda Rajulu died in the war. Padigidda Raju’s son Jampanna died by suicide, drowning in the Sampenga Vagu, unable to bear the burden of defeat.

Embarrassed by her son’s death, Sammakka went into battle and fought heroically. However, just when the Kakatiyas were in the throes of defeat, a soldier back-stabbed Sammakka and fled. Bloodied, Sammakka walked into Chilakala Gutta Hill and disappeared at the northeastern side of Medaram village.

When the tribes went on a search for Sammakka, they were greeted by a divine voice — “The kingdom achieved with a conspiracy is not heroic.” Asking people to celebrate her festival once in two years, Sammakka’s voice promised to fulfill the wishes of her devotees. Kakatiya kings then abolished the taxes of the tribes and ordered the event to be conducted every two years; marking the beginning of Sammakka and Saralamma Jatara.