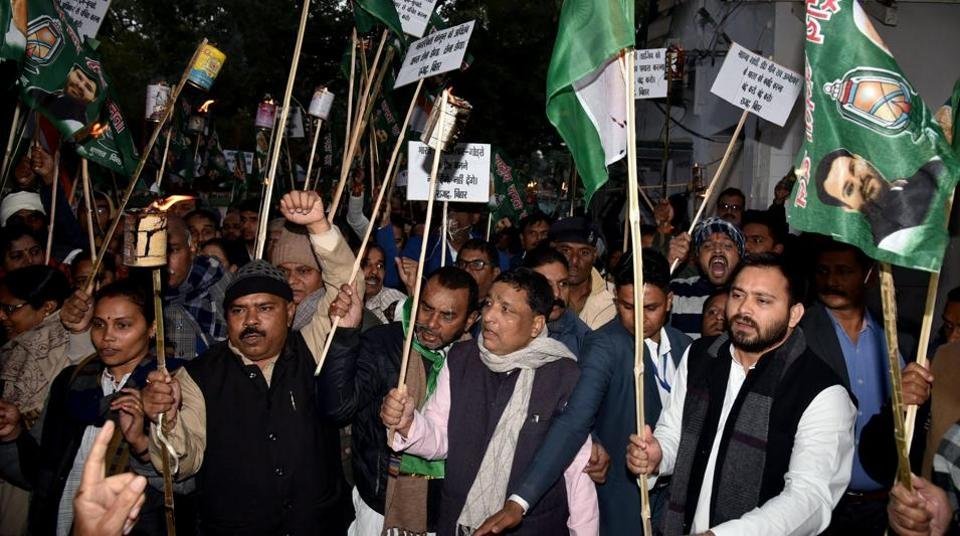 Tejashwi Yadav of the RJD, which has given the call for a Bihar Bandh against the citizenship act, has appealed to the people of the state to participate in the shutdown.

Rashtriya Janata Dal leader Tejashwi Yadav along with supporters take part in a protest march against the Citizenship Amendment Act and National Register for Citizens, in Patna on Friday. (ANI file photo)

Bare-chested supporters of the Rashtriya Janata Dal blocked highways using buffaloes, sat on railway tracks and shouted slogans on Saturday to protest against the Citizenship (Amendment) Act and proposed National Register of Citizens (NRC) in at least two places in Bihar.

Tejashwi Yadav of the RJD, which has given the call for a Bihar Bandh against the citizenship act, has appealed to the people of the state to participate in the shutdown.

“In protest against CAA and NRC, the RJD will be leading a Bihar bandh on December 21. On its eve, the party carried a torch rally in all districts to give a call for a peaceful protest,” the former deputy chief minister had tweeted on Friday.

The RJD’s workers and supporters protested bare chest as they shouted against Bihar chief minister Nitish Kumar and the central government in Darbhanga. They blocked the highway by burning tyres and also protested at the railway line and disrupted the movement of trains.

In Vaishali, the RJD’s workers blocked the highway with the help of buffaloes.

As Tejashwi Yadav opposed the proposed NRC, he said people would not be able to prove their identity if it is implemented, as their identity documents often get washed away in the floods in the state.

“In Bihar, people’s documents flow away with floodwaters. How can they prove their identity?” Yadav had asked.

Nitish Kumar of the Janata Dal (United), an ally of the Bharatiya Janata Party and member of the BJP-led National Democratic Alliance, had signalled his opposition to an NRC exercise.

He is the first chief minister of an NDA-ruled state to shut its doors on the citizens’ register that would be crucial to the BJP-led national coalition delivering on its promise to expel infiltrators.

However, his party had voted in favour of the controversial changes in the citizenship act that allows the government to give citizenship to minorities from three Muslim countries Bangladesh, Afghanistan and Pakistan.

Protests have intensified in various parts of the country after CAA was enacted on December 12.

Opposition parties and civil society say the law is unconstitutional because it links faith to citizenship and discriminatory because it omits Islam.