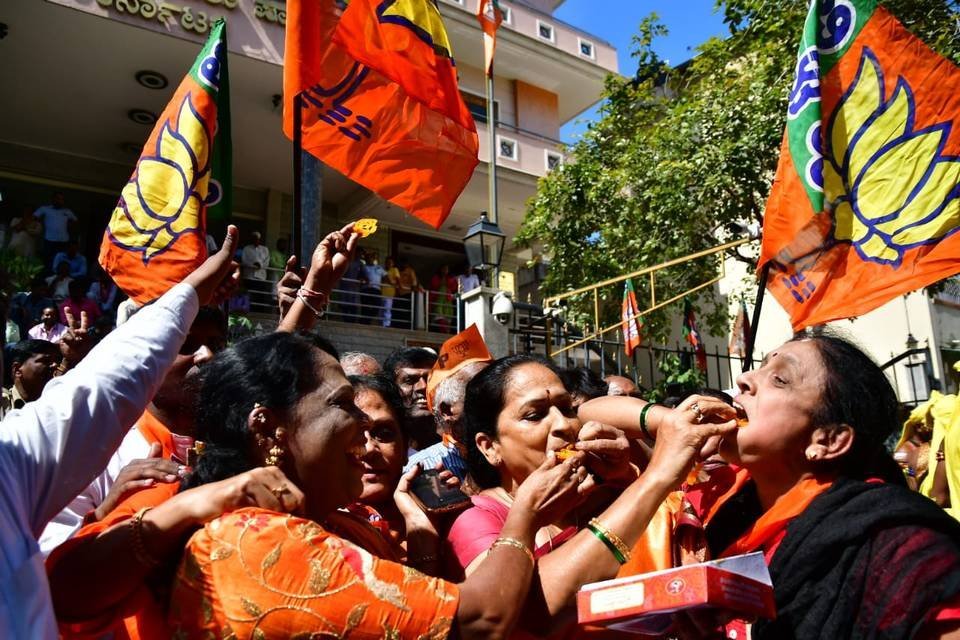 BJP workers celebrate the party’s victory in the byelections.

While the Congress managed to win two seats, the Janata Dal (Secular) drew a complete blank

The ruling BJP led by Karnataka Chief Minister B.S. Yediyurappa recorded a massive victory in the byelections to 15 Assembly constituencies across the State, winning 12 constituencies, while the Congress managed to win two seats and the Janata Dal (Secular) drew a complete blank.

Of the 13 disqualified legislators, who had been fielded by the BJP, 11 have managed to retain their seats. The victory to BJP not only assures stability to its government, but also makes 76-year-old Mr. Yediyurappa stronger within the party.

The party had not given ticket to two other disqualified legislators Roshan Baig in Shivajinagar and R. Shankar in Ranebennur. The former has not been admitted into the BJP.

Elections were not held in Raja Rajeshwari Nagar and Maski Assembly constituencies where election-related petitions are in the court.

While the Congress managed to retain Shivajinagar where its nominee Rizwan Arshad defeated his nearest rival BJP’s M. Saravana, it wrested Hunsur from the JD (S).

‘Will give stable govt.’

An elated Mr. Yediyurappa told presspersons that the victory had brought big responsibility on the party, and appealed to the Opposition Congress and JD (S) not to continue to destabilise his government. “I do not wish to criticise the Opposition leaders as voters have given the mandate. I will give a stable government for the next three and a half years.” Further, he also said that the party would honour the promises made to the disqualified legislators of making them Ministers.

Referring to the verdict, Prime Minister Narendra Modi, in his election campaign in Jharkand, said that the voters have “taught Congress a lesson” for preventing the BJP from forming the government using its backroom tactics. In South India where people say the BJP is weak, the party is winning more seats. “Voters through democratic means have punished the Congress,” he said.

In all, 17 legislators — 14 from the Congress and three from the JD (S) — had resigned, bringing down the JD (S)-Congress coalition government.