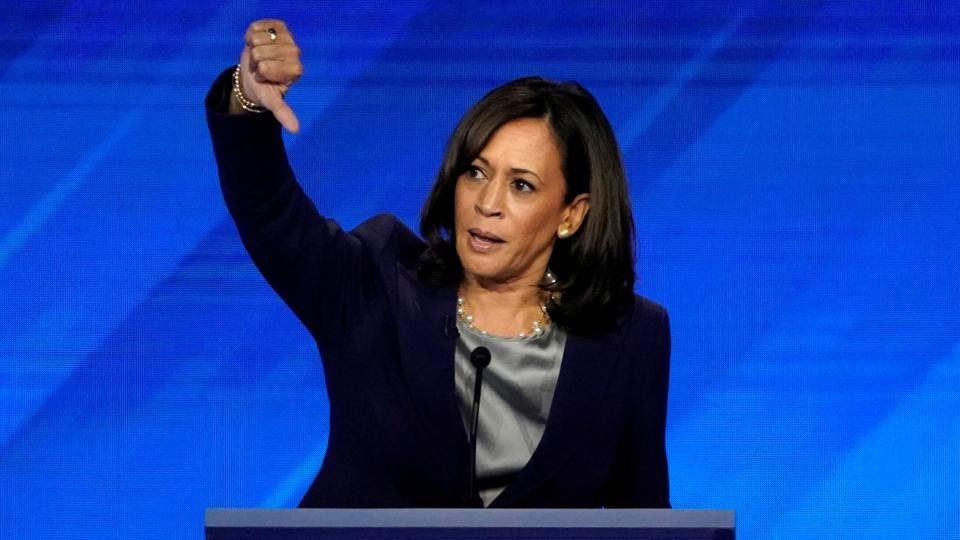 US President Trump was responding to a tweet posted by his former campaign manager Corey Lewandowski, who mocked Kamala Harris’ decision to withdraw her bid for the top post.

Senator Kamala Harris has dropped out of 2020 US presidential race.

US President Donald Trump on Tuesday took a jibe at Democrat Senator Kamala Harris, who has dropped out of the 2020 presidential race.

“Too bad. We will miss you Kamala!” Trump tweeted.

The president was responding to a tweet posted by his former campaign manager Corey Lewandowski, who mocked Harris’ decision to withdraw her bid for the top post.

“Don’t worry, Mr. President. I’ll see you at your trial,” Harris hit back at Trump, referring to the impeachment enquiry initiated against him for his dealings with Ukraine.

In a video message on Twitter, Harris has said that she was finding it difficult to manage her campaign due to paucity of financial resources and vowed to continue her fight for the future of the country by defeating Trump.

The Democrat’s withdrawal from the 2020 race marked the end of her bid for the top post that saw her poll numbers plummeting and fundraising performances drying up.

Harris, who officially announced her candidacy for the US president in January this year, was seen as a front-runner for the top post even before beginning her campaign with a massive public gathering in her home town Oakland in California.

However, she struggled to convert the early enthusiasm into a proper and sustained movement for the presidency and was criticised for her inability to articulate a vision on issues like healthcare, The Hill reported.

Harris’ polling charts soared when she took on former Vice President Joe Biden in the first Democratic presidential debate in June. Since then, her campaign failed to gain traction and her polling numbers continued to sink.

The Democrat Senator from California was the first African-American woman to announce a run for the White House in 2020.