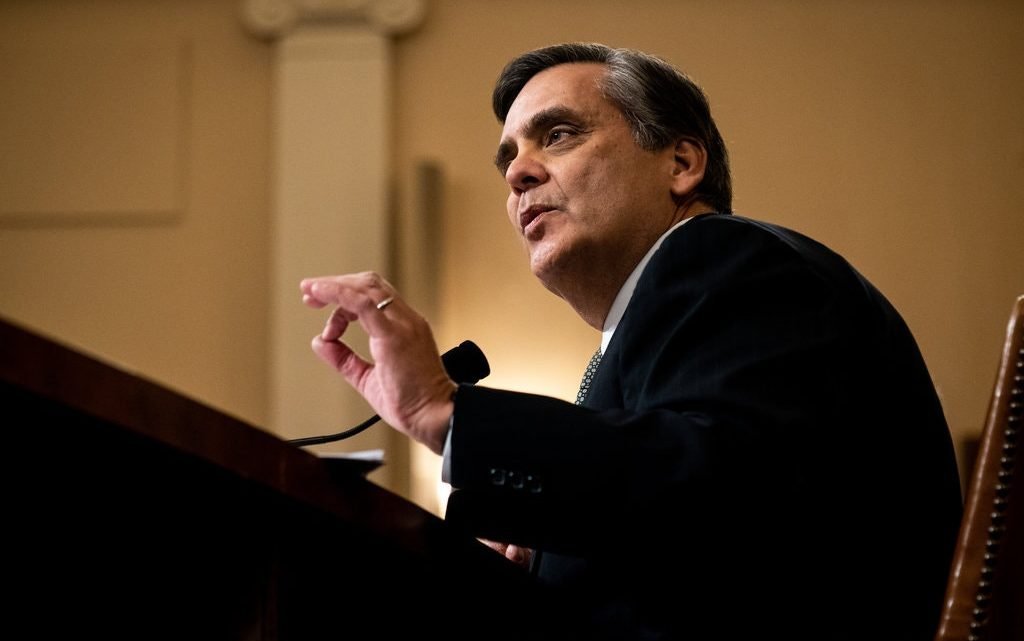 At the first House Judiciary Committee impeachment hearing, Republicans’ witness said lawmakers were rushing the process and should instead let court fights over access to witnesses play out.

Jonathan Turley, a law professor at George Washington University, said Congress had assembled “a facially incomplete and inadequate record in order to impeach a president.”Credit…

WASHINGTON — Are House Democrats making a mistake by moving swiftly to impeach President Trump when some facts remain hidden about whether he abused his power in the Ukraine affair?

That was the argument put forward on Wednesday by Jonathan Turley, a George Washington University law professor who was the only Republican-selected witness of four legal scholars who testified at the House Judiciary Committee’s opening impeachment hearing.

Mr. Turley’s point crystallized the constitutional dilemma facing Congress as it pushes forward on impeachment rather than pausing to go after additional evidence the White House has withheld. A president willing to dig in and stonewall subpoenas for documents and testimony can use the courts to run out the clock, undermining the House’s ability to use its impeachment power in practice.

Calling “the abbreviated period of this investigation” both problematic and puzzling, Mr. Turley said Congress had assembled “a facially incomplete and inadequate record in order to impeach a president.” The evidence has gaps because of “unsubpoenaed witnesses with material evidence,” he argued, and it is wrong to move forward without hearing from them.

Democrats have conceded that they would like to obtain more documents and hear more testimony from Mr. Trump’s key aides, but they have also argued that the evidence they have is sufficient to impeach him — and said it is absurd for the White House to contend their case has holes when it is thwarting their access to more information.

The chairman of the House Judiciary Committee, Representative Jerrold Nadler of New York, noted Mr. Trump’s stonewalling and said that Congress “must act now” because the president had “made clear that if left unchecked,” he would again ask a foreign government to intervene in the American election.

“While the Republican witness may not be convinced that there is sufficient evidence that the president engaged in these acts, the American people and the majority of this committee disagree,” Mr. Nadler added.

When a president systematically blockades congressional subpoenas and instructs current and former aides not to provide documents and testimony, that is another basis to impeach, argued another witness, Michael J. Gerhardt, a University of North Carolina law professor and author of “The Federal Impeachment Process: A Constitutional and Historical Analysis.”

“In this situation, the full-scale obstruction of those subpoenas, I think, torpedoes separation of powers and, therefore, your only recourse is to, in a sense, protect your institutional prerogatives, and that would include impeachment,” Mr. Gerhardt testified.

Notably, Mr. Turley — who said he had not voted for Mr. Trump — did not assert the president did nothing wrong, as hard-core supporters of the president have done. He said that a now famous call in which Mr. Trump pressured Ukraine’s president to announce investigations that could benefit him politically “was anything but perfect,” and that Congress had a legitimate reason to scrutinize it.

But, he argued, it is premature to rush forward with impeachment while Congress has yet to obtain potentially knowable facts about what Mr. Trump said to his aides about withholding a White House meeting and $391 million in military aid that Ukraine desperately needed to shore up its defenses against Russian aggression. 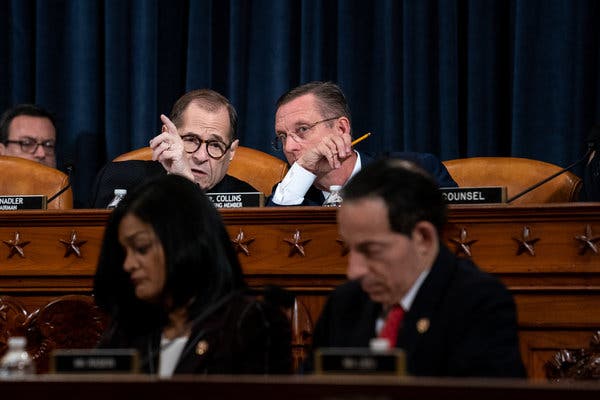 Much of the evidence the House uncovered in its inquiry was from witnesses who largely were a degree of separation removed from Mr. Trump himself. As a result, they were unable to say whether the president ever directly and explicitly said he was conditioning a meeting and the securing of funding for the specific purpose of coercing Ukraine’s president into announcing investigations that would benefit him politically.

Mr. Bolton is known to have opposed what Mr. Giuliani was doing for Mr. Trump with Ukraine, met directly with Mr. Trump to discuss the frozen aid to Ukraine in August and has coyly indicated that he knows something important that Congress does not yet know.

“There remain core witnesses and documents that have not been sought through the courts,” Mr. Turley wrote, adding that the House “is moving forward based on conjecture, assuming what the evidence would show if there existed the time or inclination to establish it.”

But Mr. Turley made only a passing reference in his written statement to the problem that has bedeviled impeachment investigators: The White House has directed top aides to Mr. Trump not to cooperate with the House, while asserting that they are immune from being subpoenaed to testify about their discussions with the president.

Mr. Bolton, for example, has refused to testify unless and until a judge orders him to, and has made clear he will file a lawsuit to put the matter into court if he receives a subpoena rather than deciding for himself whether Congress’s claimed power to compel his testimony, or the president’s claimed power to block lawmakers from receiving it, should prevail.

But the legal unraveling of Mr. Trump’s argument has been a slow process. The opening stage of the fight over the subpoena to Mr. McGahn consumed nearly a third of the year before the judge completed a 120-page ruling rejecting it. The Justice Department then immediately appealed. It can repeat that process before a three-judge panel, and then again before the full appeals court and then before the Supreme Court.

And even if the Supreme Court ultimately orders such an official to show up for testimony, he could then refuse to discuss conversations with Mr. Trump on the ground that their contents are privileged. That would start a new cycle of litigation.

That means that for the witnesses Mr. Turley identified as having potentially material additional information, the Justice Department would very likely be able to keep the subpoena tied up in court until long after the 2020 election.

But Mr. Turley said that Mr. Trump was “allowed” to go to court and that it would be an abuse of power for Congress to treat that as an impeachable act of obstruction. He pointed to lower-court rulings against the president in subpoena cases like Mr. McGahn’s as “an example of what can happen if you actually subpoena witnesses and go to court” — even though those lower-court rulings took months to achieve and were immediately appealed 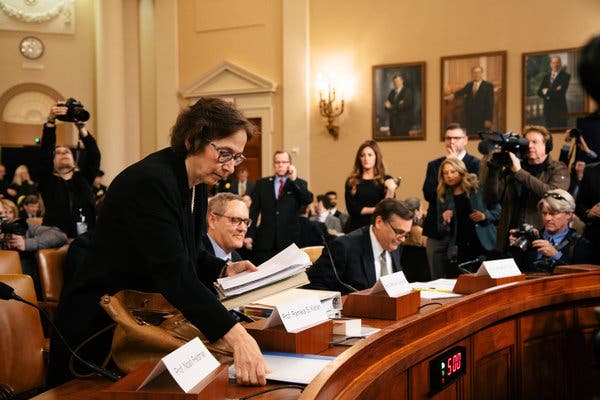 Referring to a piece of evidence Mr. Trump’s allies do not dispute — the White House’s record of a July 25 call between Mr. Trump and Ukraine’s president — she invoked an analogy: the governor of a state hit by a hurricane or flood asking for a meeting with the president to discuss disaster assistance provided by Congress. She asked what would happen if the president replied: “I would like you to do us a favor. I’ll meet with you and I’ll send the disaster relief once you brand my opponent a criminal.”

Ms. Karlan said: “Wouldn’t you know in your gut that such a president had abused his office, that he betrayed the national interest and that he was trying to corrupt the electoral process? I believe that the evidentiary record shows wrongful acts on that scale here.”

Still, the White House call record was not that explicit. Mr. Trump did respond to the Ukrainian president’s mention of military assistance by saying “I would like you to do us a favor, though” and then talked about his desire for investigations, including into former Vice President Joseph R. Biden Jr. and his son, but the call record does not show that Mr. Trump explicitly made such investigations a condition for the meeting and the military aid.

The question facing Congress, then, is whether the available record, while imperfect, is nevertheless sufficient to fairly deduce that Mr. Trump was the architect of a quid pro quo — or whether to wait for the distant prospect of someday obtaining more facts through court.

Republicans on Wednesday ran in part with Mr. Turley’s theme. Representative Doug Collins of Georgia, the top Republican on the committee, emphasized that the facts of what Mr. Trump did are disputed, unlike those during the Nixon and Clinton impeachment proceedings.