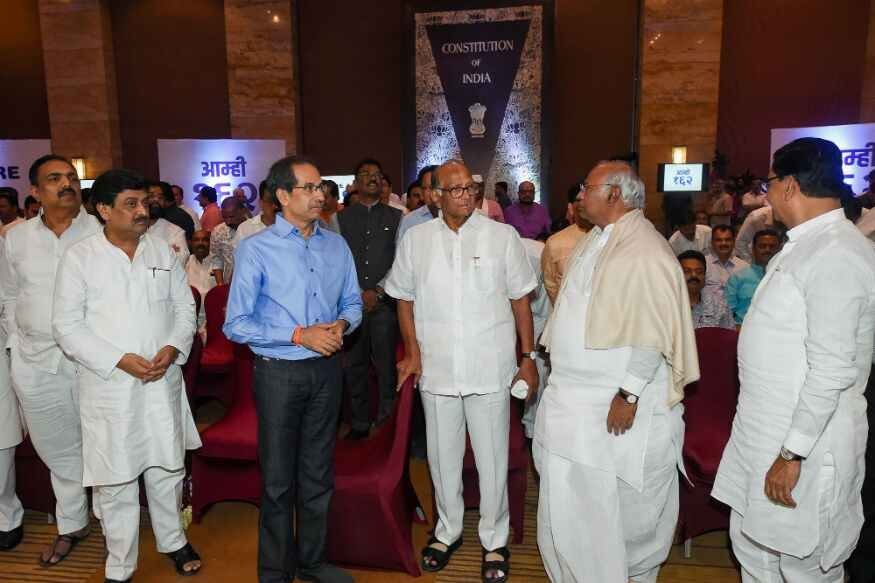 According to NCP MLA Dhananjay Munde, 162 MLAs of the ‘Maha Vikas Aghadi’ comprising the Shiv Sena, the Nationalist Congress Party (NCP) and the Congress assembled for a joint ‘parade’ at Grand Hyatt in Mumbai.

New Delhi/Mumbai: The Supreme Court is set to pass an order on Tuesday on holding a crucial floor test in the Maharashtra Assembly to ascertain whether Chief Minister Devendra Fadnavis enjoyed majority, as the Shiv Sena, the NCP and the Congress put up a public show of strength to claim they have the numbers to form a new government.

The order will be passed at 10.30 am on Tuesday, the court said on Monday, giving the shaky 3-day-old Maharashtra government a breather in the intense battle for numbers between the rival camps.

According to NCP MLA Dhananjay Munde, 162 MLAs of the ‘Maha Vikas Aghadi’ comprising the Shiv Sena, the Nationalist Congress Party (NCP) and the Congress assembled for a joint ‘parade’ at a luxury hotel in suburban Mumbai and took oath not to fall prey to any inducements by the BJP. Sena chief Uddhav Thackeray, NCP supremo Sharad Pawar and Congress leader Ashok Chavan were among others present.

BJP MLA Ashish Shelar responded to the show of strength by the 3-party alliance on Monday night, saying a majority in the Assembly cannot be proved by such parades. The dramatic turn of events that led to the return of BJP’s Fadnavis as chief minister on Saturday propped up by NCP’s Ajit Pawar after the latter’s revolt against the Sharad Pawar-led party also echoed in Parliament with the Congress and other opposition members creating a ruckus. Ajit Pawar, the nephew of Sharad Pawar, was made the deputy chief minister.

Both the Lok Sabha and the Rajya Sabha were adjourned several hours ahead of schedule in the wake of unrelenting protests by the opposition members.

Congress leader Rahul Gandhi set the tone for the protests when he refused to ask a supplementary question during Question Hour in the Lower House at 11 am, saying there was no point in doing so as “democracy has been murdered in Maharashtra”. The Congress also alleged that women parliamentarians were manhandled by marshals in the Lok Sabha when they were protesting in the Well of the House.

Though the deadline for proving majority has not been brought on judicial record, Solicitor General Tushar Mehta, appearing for the Centre and the Secretary to the Governor, and senior advocate Mukul Rohatgi, appearing for Fadnavis, told the court that the Governor had given 14 days time.

The order by the apex court bench comprising justices N V Ramana, Ashok Bhushan and Sanjiv Khanna came after a 80-minute hearing on a petition by the 3-party combine against the governor’s decision to invite the BJP to form the government and swearing in Fadnavis and Ajit Pawar as the chief minister and the deputy chief minister respectively.

The Sena-led combine pressed for an order for carrying out the floor test on Monday itself, which was opposed by Fadnavis and Ajit Pawar. The BJP is the single largest party with 105 MLAs in the 288-member state assembly followed by the Shiv Sena (56), NCP (54) and Congress (44). The majority mark is 145.

The Centre told the apex court that the BJP had the support of all 54 NCP MLAs to form a government and asked for two to three days to reply to the plea against Governor Bhagat Singh Koshyari’s decision.

Appearing for the Shiv Sena, senior advocate Kapil Sibal countered the BJP by saying the combine has affidavits from 154 MLAs and the BJP should be asked to prove its majority within 24 hours if it has the numbers.

In Mumbai, leaders of the Shiv Sena, NCP and the Congress earlier in the day submitted a letter to the governor, reiterating their claim that they have the required numbers to form a government.

Addressing reporters, Shiv Sena’s Sanjay Raut said the three parties have signatures of all their respective MLAs and will submit the list to the Supreme Court.

Sharad Pawar, who has become the rallying point for the 3-party combine, reiterated he was not behind Ajit Pawar’s decision to align with the BJP and become the deputy chief minister. Talking to reporters, the Maratha strongman asserted that his party along with the Congress and the Shiv Sena will form the next government.

The BJP, in turn, accused Congress members of bringing “shame” to the Lok Sabha with their “unruly” conduct and rejected the opposition party’s claims that its MPs were manhandled.

Amid the high political drama and fear of ‘poaching’ of MLAs, the NCP shifted its legislators from a five-star resort to two other hotels in Mumbai. Congress legislators are at a suburban hotel in Andheri as are the Sena’s MLAs.

Mehta said nobody was disputing that a floor test was an ultimate test and no party could say it had to be conducted in 24 hours and also questioned whether the apex court could monitor the proceedings of the House, which was constitutionally barred.

After perusing Koshyari’s letter inviting Fadnavis, the bench said it has to be decided whether the chief minister enjoyed majority on the floor of the House. Ajit Pawar told the court he is from the real NCP and was authorised by 54 of the party’s MLAs to take a decision on their behalf on government formation.