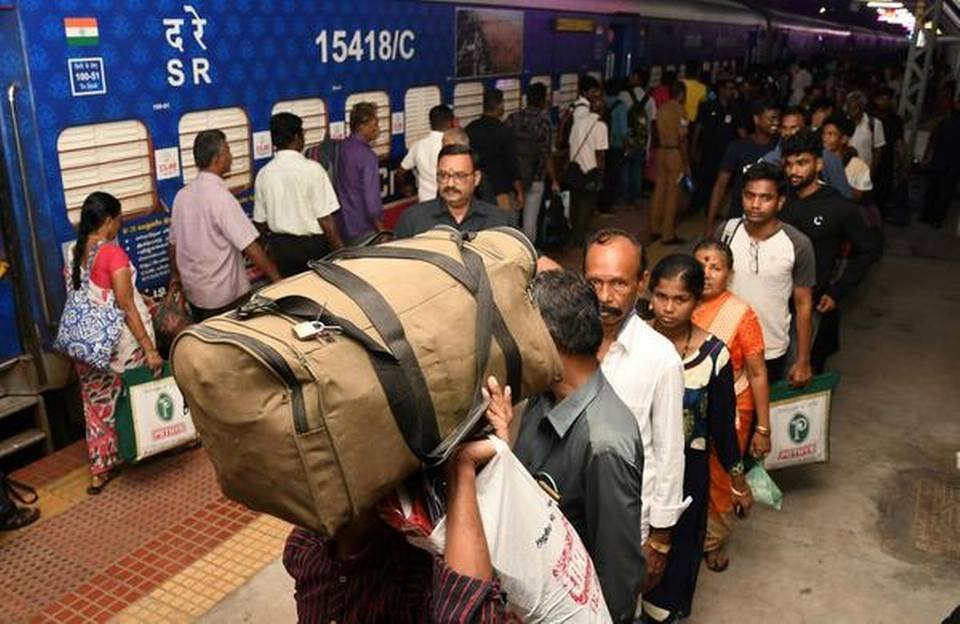 Back to the daily grind: Passengers getting into an unreserved coach of Pandian Express in an orderly fashion at Madurai railway junction on Monday.

With last-minute travellers turning up in large numbers at Madurai railway junction to return to work in Chennai after Deepavali, the presence of Railway Protection Force and RPF Mitra helped maintain orderliness in passengers getting into the unreserved coaches of Pandian Express.

As early as 1 p.m. itself, passengers started standing in a queue to board the train which departs from first platform at 8. 45 p.m. “A board was kept in the railway junction marking the starting point of the queue for unreserved coaches to help the passengers,” said A. John Ravi, a RPF mitra who was on duty at the rear end of the train. As expected, the crowd swelled to over 500 on Monday night, he said.

“Anticipating the big crowd, we roped in additional four volunteers of mitra and nine of us managed to keep the queue system in order,” he said. With the help of uniformed personnel, the volunteers guided the passengers into the unreserved coaches on first-come first-served basis.

As the crowd was high, the mitra volunteers advised the passengers to adjust themselves by accommodating additional passengers. “The seats are meant for only four passengers. But five persons were accommodated on each seat,” he added.

Children occupied the space meant for luggage. Even after the seating was completed, many passengers squeezed themselves into available space in the coaches.