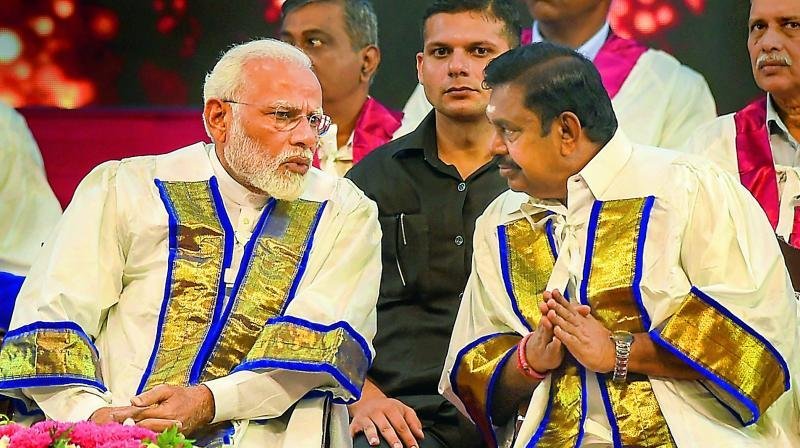 Tamil now a talking point in the US, says PM Modi

Says campaign to avoid single-use plastic was misinterpreted; calls for padayatra on Oct. 2.

Chennai: Prime Minister Narendra Modi said making India a great nation can happen only through the participation of 130 crore Indians. He was participating in the 56th convocation of the Indian Institute of Technology (IIT) Madras.

Landing in the city amid chants of ‘Modi, Modi’, the PM drew the attention of the crowd gathered at the airport to welcome him, saying he spoke in Tamil in America.

“During my USA trip when I said something in Tamil — when I told the world that Tamil is the world’s ancient language, the language became a talking point in America,” he said. Pointing out that this was his first visit to the metro after the April general elections, he said, “I am highly indebted to all of you for coming in such large numbers to welcome me. I am always delighted to be back in Chennai.”

In his address to the United Nations General Assembly, Mr. Modi had quoted Sangam era Tamil poet Kaniyan Pungundranar to underline that a fragmented world is in nobody’s interest. He quoted the poet, who said 3,000 years ago, ‘yaadhum oore, yaavarum kelir’ (we belong to all places and to everyone).

“During my visit to the USA, I realised that the world is looking up to India with great expectations and that the expectation is increasing by the day. Now it is our responsibility to not only make India a great nation but also to see to it that it meets the expectations of the world community,” he said. And this cannot merely be done by the Union government but can happen only through the 130 crore Indians.

“It can happen only with the effort of every Indian in the nook and corner of the country, whether rich or poor, rural or urban, young or old,” Mr. Modi said.

His government had achieved many a success through public participation and in the same way he hoped to rid the country of single-use plastic.

“Some people by mistake are misinterpreting that I wanted India to be rid of plastic, I did not say so, What I said was that I want the country should be rid of single-use plastic. This plastic can be used only once and it creates a lot of problems later,” the PM clarified.

On Oct. 2, which marks the 150th birth anniversary of Mahatma Gandhi, he had called for a padyatra to spread the ideals of Gandhi.