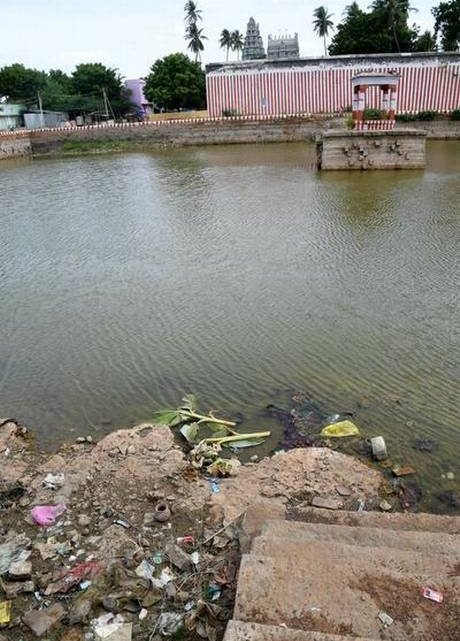 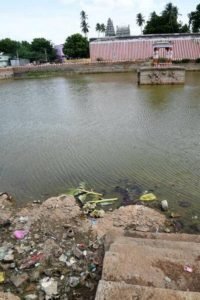 Crying for attention: Unlike many other dry tanks, there is a minimum level of water available at Kalamega Perumal Temple tank in Tirumogur for most part of the year.

The tank was desilted six years back

It was a sunny Friday afternoon and some people were taking bath in Kalamega Perumal Temple tank in Tirumogur, a village fast turning into a suburb. Unlike many other temple tanks, there is a minimum level of water available at the tank for most part of the year. However, the tank is not maintained properly.

Sprawling across two acres, the tank has a small mandapam at its centre. The tank receives water through a feeder channel from Tirumogur irrigation tank. The surplus water from the tank is connected to an irrigation channel that takes water to farm lands.

Other than hosting the float festival for the temple, the tank is one of the main source of water for the village residents who use the water to take bath and wash their clothes. There is a floating mass of algae and soapsuds. Plastic water bottles, shampoo sachets and bags of dry flowers have accumulated along the edges of the tank, making it unhygienic.

An official from the Hindu Religious and Charitable Endowments Department says, “Washing of clothes using chemical detergents is the main cause of pollution in the tank.”

V. Jayasudha, a resident, says the tank has been degraded and reduced to a pitiable state. “Earlier, when it was brimming with water, the waste from the tank would come out through a passageway and ensured that the tank remained clean,” she says.

The official says steps were taken to clean the tank. “The residents must also cooperate with us in the process,” he adds.