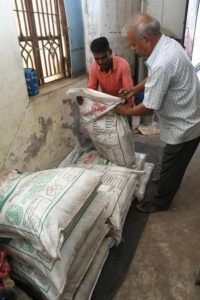 Manure sold at a store inside MGR bus stand at Mattuthavani in Madurai.

Madurai Corporation has been producing it since 2016

Lack of awareness has resulted in lower sale of manure produced by Madurai Corporation at Vellaikkal dump yard.

Since 2016, the Corporation has undertaken the production and sales of manure produced at the dump yard in Vellaikkal.

Around 630 metric tonnes of garbage is generated in the city on a daily basis. Organic waste which contributes 50% of the total waste is segregated and fed into a composting machine for shredding. After this decomposition of the waste through the aerobic composting process takes place for a 45-day period. The dried compost is then sieved to produce manure.

A Corporation official said that on various instances they have requested the officials from the Horticulture Department to promote the usage of the organic manure among farmers. “But our requests have not been attended to,” says the official.

The official said that a Corporation van visits villages to promote the product among farmers. “This move has to be intensified,” adds the official.

There are no signboards to indicate the presence of the store selling compost at Mattuthavani bus stand, complains V. Palanisamy, a tourist. Currently, the store sells manure at a bulk quantity of 50 kg. “This discourages customers who want to buy a lower quantity of manure,” says Mr. Palanisamy.

A health official of the Corporation says that more number of stores, especially in villages have to be set up to reach their target audience. “Many farmers and interested parties are choosing private players as they transport the compost to their places at free of cost. If stores are opened close to agricultural hubs, the sales will increase,” says the official.

Corporation Commissioner S. Visakan said he had contacted the officials from Horticulture Department to sell the manure during the farmers grievance meetings. He also said that once the decentralised waste management system comes into place, the manure produced at micro-composting centres will be easily accessible to the customers.

Coimbatore Police to use body-worn cameras during vehicle checks