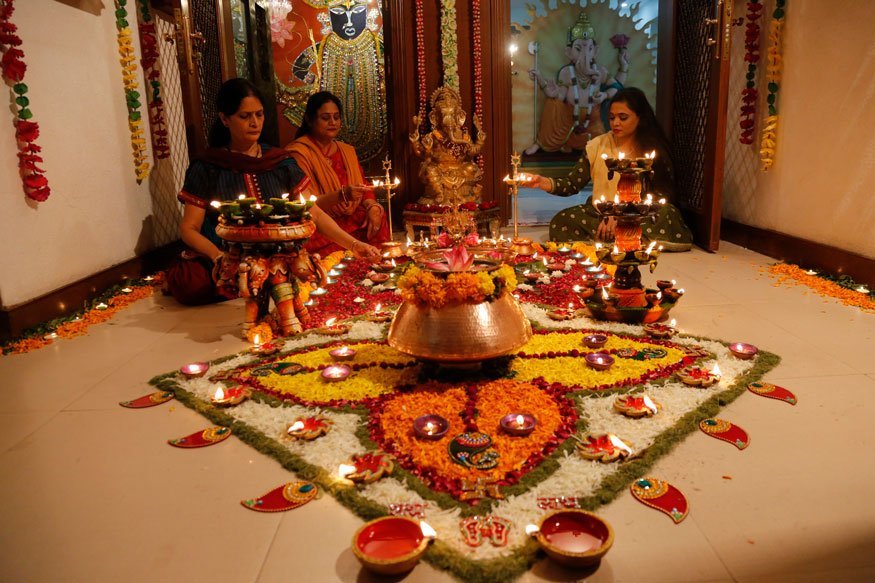 What Do People Do?

Diwali celebrations may last for up to five days. Many people decorate their home and workplaces with tiny electric lights or small clay oil lamps. Bowls of water with candles and flowers floating on the surface are also popular decorations.

Many people make a special effort to clean their homes and yards before Diwali. They may also wash themselves with water and fragrant oils, wear new clothes and give gifts of sweets to family members, close friends and business associates. Fireworks are set off in the evening in some areas. Melas (fairs) are held in many towns and villages.

People in different regions in India may celebrate Diwali on various dates. This is because traditional lunar calendars can be interpreted in different ways. For example, Deepavali in Tamil Nadu is celebrated in the Tamil month of Aipasi.

Government offices, post offices and banks are closed in India on Diwali. Stores and other businesses and organizations may be closed or have reduced opening hours. Transport is usually unaffected as many locals travel for religious celebrations. However those wishing to use public transport on the day should check with the local transport authorities on public transit schedules.

Deepawali or Diwali is a festival of lights symbolizing the victory of righteousness and the lifting of spiritual darkness. The word “Deepawali” refers to rows of diyas, or clay lamps. This is one of the most popular festivals in the Hindu calendar. It commemorates Lord Rama’s return to his kingdom Ayodhya after completing his 14-year exile. The myths around Rama and Ravana are told during another holiday, known as Dussehra or Vijaya Dashami.

The Goddess Lakshmi was Vishnu’s consort and she symbolizes wealth and prosperity. She is also worshipped on Diwali. This festival is celebrated in West Bengal as “Kali Puja”, and Kali, Shiva’s consort, is worshipped during Diwali. The Diwali festival in southern India often commemorates the conquering of the Asura Naraka, a king of Assam who imprisoned many people. It is believed that Krishna freed the prisoners.

Many Buddhists in India mark anniversary of the Emperor Ashoka’s conversion to Buddhism around the time of Diwali. Many scholars believe that Ashoka lived between 270BCE and 232 BCE. Many people who observe Jainism mark the anniversary of Mahavira’s (or Lord Mahavir) attainment of nirvana on October 15, 527 BCE. Mahavira established the central spiritual ideas of Jainism. Many Jains celebrate the Festival of Lights in his honor.

Bandi Chhorh Divas, which is the Sikh celebration of the sixth Nanak’s (Guru Har Gobind) return from detention in the Gwalior Fort, coincides with Diwali. This coincidence has resulted in the similarity of celebrating the day among many Sikhs and Hindus.

Electric lights, small oil lamps made of clay and flames are important Diwali symbols. They represent both physical and spiritual aspects of light.

About Diwali/Deepavali in other countries

Note: During a gazetted holiday, government offices and most businesses are closed so people have a day off work.