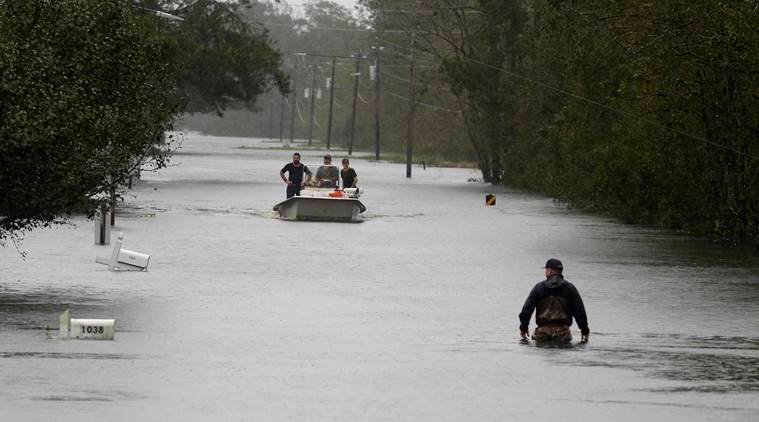 Deadly storm Florence’s historic rainfall is testing the best efforts by many North Carolina cities to bolster their defences against flooding since Hurricane Matthew inundated the eastern part of the state two years ago.

Since Matthew, firefighters have been trained in rapid water rescue and are equipped with inflatable boats used to pluck people from raging rivers and streams. More dams have been built on many of the rivers that snake through the state, and improved forecasting tools have made it easier to position rescue teams.

In the city of Lumberton, where the Lumber River overflowed its banks following Matthew, the city built a berm, an earthen wall along the riverbank to contain the rising current and prevent a repeat of the 2016 flooding.

The berm is intended to supplement a recently completed dam built across the river to allow for a controlled release of the water flow.

“We saw what was coming, so we started building a dam to keep that area from breaking through like it did before,” said Bill French, director of emergency services for Lumberton. But on Sunday, the combination of the dam and berm failed to stop the swollen river from climbing beyond its banks as it reached about 24 feet (7.3 m), rising 17 feet (5.2 m) in two days alone. It could get worse, with the river forecast to crest at 25.7 feet (7.8 m) late on Sunday.

Using a head start from forecasting of the slow-moving rains, French said the city began running half a dozen pumps to clear water from drainage canals. “When the river gets as high as it is now, you’re kind of limited in what you can do,” he said.

Overall, Florence, a onetime hurricane that weakened to a tropical depression by Sunday, is forecast to douse the state with record rainfall from a single storm, surpassing the 24 inches (60 cm) that Hurricane Floyd dropped in 1999. In some spots in the offshore Outer Banks islands, 33 inches (84 cm) of rain were recorded this weekend.

Similar precautions were taken in Wayne County on the banks of the Neuse River, where a furniture store devastated by Matthew removed all its heavy merchandise before the expected storm. The area is made vulnerable by the flat landscape, said Scott Stevens, the city manager in Goldsboro. “A foot of water doesn’t spread out a foot. It spreads out a 100 feet,” he said.

Rivers may fill up even faster now that soil is so storm-slicked and sodden it cannot hold more water, said Drew Coleman, a professor of geological sciences at the University of North Carolina.

“It’s not a feasible location for us to do a lot of flood proofing on a large scale,” said Stevens, the Goldsboro city manager. Since Matthew, Goldsboro has trained firefighters in water rescues and equipped them with additional boats, Stevens said, saying the city was “much better prepared with equipment and training to help people.”

Federal rescue teams were also positioned before the rivers could rise, with a search-and-rescue team based in Lincoln, Nebraska, joining efforts in Fayetteville to make sure senior citizens were safe ahead of the worst of the flooding. More than 140 people were evacuated from a nursing home in Fayetteville late on Saturday by a rescue team comprised of federal responders, state and local emergency workers, said Maine Johnson, a spokesman for the city of Fayetteville.

The worst may be yet to come, said Evan Duffey, a meteorologist at Accuweather in State College, Pennsylvania. “All the water from further upstream takes a little while to get down to them.” The Cape Fear River, with a normal depth of just 2 feet (0.6 m) near Fayetteville, is expected to crest late on Monday at 26 feet (7.9 m), which could upend life in the city of about 200,000 people, still recovering from a costly flood in the aftermath of Matthew two years ago.

In towns like Lumberton, which lies just 25 feet (7.6 m) above sea level, even the best preparations cannot protect the entire area, said French, the emergency services manager. “There are some areas that you simply can’t do anything about.”