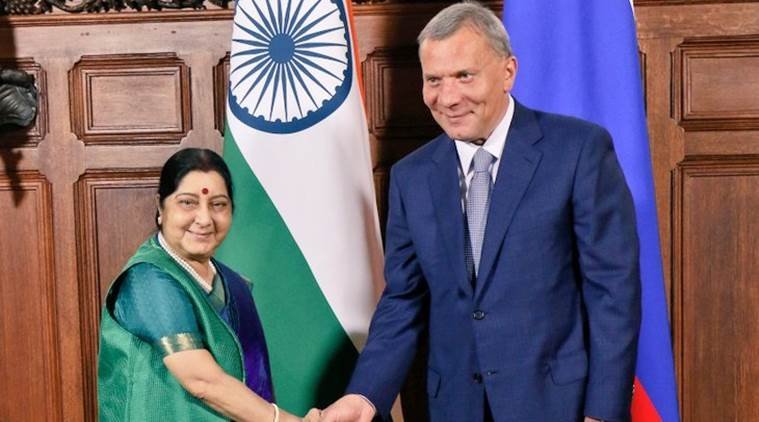 India attaches the “highest importance” to its relations with Russia, External Affairs Minister Sushma Swaraj said Friday, as she conducted a comprehensive review of bilateral ties ahead of President Vladimir Putin’s planned visit to New Delhi early next month.

Russian President Vladimir Putin says the two men Britain suspects of poisoning Sergei Skripal, a former Russian spy, were ordinary citizens with nothing special about them. Russia knows the real identity behind their aliases, he said.

Swaraj, in a statement after the meeting said: “India and Russia enjoy a special and privileged strategic partnership.

“This partnership has strengthened over time and covers a vast agenda involving almost all sphere of human activity. India attaches the highest importance to its relations with Russia”.

The commission has met in the run up to the 19th India-Russia Annual Summit which is expected to be held in India early next month, she said, adding that both sides are currently working to prepare for this summit.

President Putin is expected to visit India for the summit with Prime Minister Narendra Modi.

“The Deputy Prime Minister and I have conducted a comprehensive review of our relations. I am satisfied with the outcomes of our meeting,” Swaraj commented after the meeting.

“I am confident that our deliberations today will further strengthen our cooperation with Russia in all fields in existing and new areas of cooperation,” the minister said.

“We discussed ways and means to increase this momentum, ensure balanced trade, and remove barriers to trade.

“Two-way investments have already crossed the USD 30 billion target, which we had set for 2025. We have therefore proposed that we enhance this figure to USD 50 billion by 2025,” she said.

Swaraj said both sides also discussed the possibilities of working together on projects in third countries.

“As a new dimension of our strategic partnership, there has been a significant expansion in our cultural and tourism exchanges,” she said.

Russia and India are on track to bring the trade turnover to USD 30 billion in the coming years, Borisov said.

“Over the past years bilateral trade has reached solid growth rates, which if maintained will help us hit the target of USD 30 billion in the coming years,” Borisov was quoted as saying by Russia’s state-run Tass news agency.

At the same time he underlined the need to put in more efforts to achieve a “breakthrough” in enhancing the trade.

Swaraj noted that a festival of India covering 22 cities over a six month period is currently underway in Russia. Tourism flows in both directions and has shown impressive growth, she said.

India and Russia are working on further liberalising visa regulations on both sides, Swaraj said as she welcomed the initiative of the Russian government to enable electronic visas for Indian nationals visiting the Russia far East.

“We have identified new areas of cooperation such as agriculture, infrastructure, transport and Science and Technology. We would like to expand our cooperation in the area of space.

“We have agreed to organise the first ever India-Russia Business Summit involving major companies from both sides in early October in India,” Swaraj added.

The IRIGC-TEC is a standing body which annually meets and reviews ongoing activities of bilateral cooperation in the fields of bilateral trade and investment, science and technology, culture and other issues of mutual interest. The last meeting of IRIGC-TEC was held in New Delhi in December, 2017.

On Thursday, Swaraj met her Russian counterpart Sergey Lavrov and the two leaders had a good exchange of views on bilateral and regional issues.