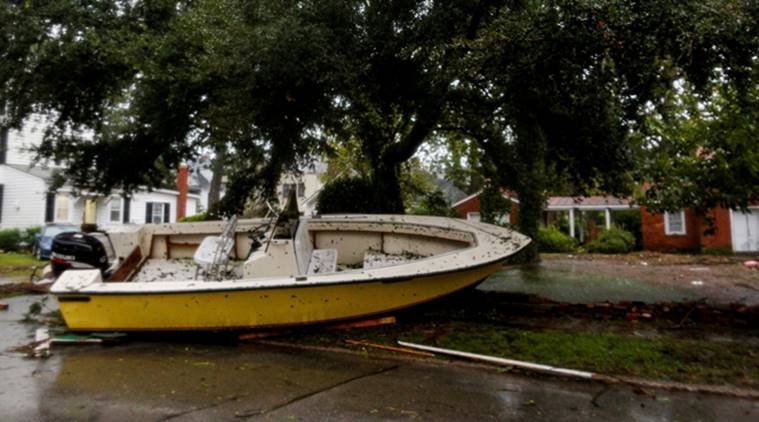 It came as rivers swelled, tides crested and the rain wouldn’t stop. And that’s when people found themselves trapped in their homes as the water rose.

Hurricane Florence is downgraded to a Category 1 but experts say the massive, slow-moving storm is still life threatening.

More than 360 people had been rescued by midafternoon Friday, but another 140 were still waiting for help, city spokeswoman Colleen Roberts told The Associated Press.

Crews from the city and the Federal Emergency Management Agency were working with citizen volunteers to get people to dry ground, Roberts said. There had been no reports of injuries or fatalities, though most of the city was without power and thousands of buildings had been damaged, she said.

67-year-old Sadie Marie Holt was among those rescued Friday.

Holt, who has diabetes and clogged arteries, said she stayed for doctor’s appointments that were canceled at the last minute. She tried to row out of her neighborhood Thursday night with a boat that was in her yard after her home began to flood, but had to retreat because of the poor conditions.

The city of about 29,000, which was founded in the early 1700s and was briefly the state capital, is near the North Carolina coast and is bordered on the east and south, respectively, by two rivers. When Hurricane Florence started battering eastern North Carolina with record rainfall, the Neuse and Trent rivers began to swell _ and combined with high tide, made for dangerous flooding.

Residents reached out for help through the night by phone and on social media.

Dawn Baldwin Gibson, 47, a minister and private school founder who lives on a farm closer to the coast in nearby Pamlico County and runs a Facebook page about weather in eastern North Carolina, had evacuated to New Bern to stay with family, thinking it would be a safer spot.

Gibson said Friday that while she and her family were safe, she and her husband had gotten around 75 calls and texts from others asking for help.

“And from that point, we started hearing where people were saying on phone calls, `I love you,’ to their family members because they were not sure they were going to get out of it alive,” she said Friday.

Gibson said she thinks some people couldn’t afford to evacuate New Bern and others didn’t pay heed to evacuation warnings after Florence dropped from a Category 4 to a Category 1. But once New Bern TV news station WCTI evacuated its newsroom Thursday night because of flooding and people began to lose power, the seriousness of the situation began dawning on folks, she said.

Tom Ballance said his wife went to Atlanta and he stayed behind in their New Bern home with their three dogs and a cat. Around 3.30 pm Thursday, the electricity went out. By midnight, his rain gauge showed that he’d gotten 9 inches (23 centimeters) of rain since midafternoon. He drifted off to sleep. About 40 minutes later, he woke and went to a sun room, where he’d boarded up all the windows except for a small hole. He shone a flashlight through the glass.

“I about jumped out of my skin,” he said in a phone interview Friday morning. “These were waves crashing down.”

Those waves were coming from the Neuse River, which is about 25 feet (8 meters) away, and downhill, from his house. He made a plan B: If the water reached the house, he’d take the pets upstairs to the second floor.

But the water never quite made it to his home. Ballance called the rainfall “biblical,” saying he’s gotten reports from friends that his downtown seafood restaurant was flooded, just like the rest of the downtown.

The National Weather Service said flash flooding was expected to continue through the rest of Friday in New Bern and surrounding areas. A 24-hour curfew was in effect.

Roberts, the city spokeswoman, said early estimates show about 4,300 residences and 300 commercial buildings had been damaged. She said that count is expected to increase significantly.