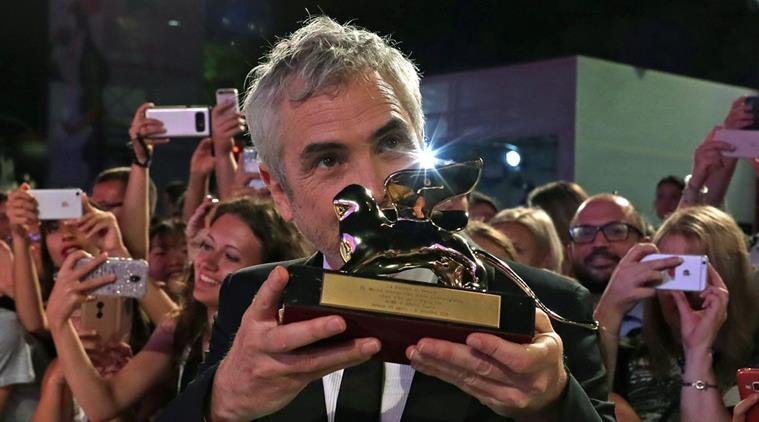 I’ve lucked into the best film of the festival. And that it happens on my last day at TIFF seems just right, rounding off a great week filled with back-to-back movies and conversation, always starting with that staple: “What are you seeing next?”

Alfonso Cuaron’s Roma is a masterly slice of life, which doesn’t feel like a film at all. You know you are in a theatre, watching events unfolding on a screen. But within a few minutes, you are right there, in Mexico City in the early 70s, amongst the members of a family — father, mother, grandmother, a brood of children, a dog and some parakeets — which lives in a large, well-appointed house, and is waited upon by two live-in maids.

There are no visible cuts. There is no discernible ‘plot’, but right from the opening scene, which will go down as one of the best ever — there are tiles being washed and we see water, we hear the swish of the broom, and then we see the reflection of a plane — all of this we see, unhurriedly, catching the rhythm of life itself.

Many filmmakers before Cuaron have tried to capture real life while keeping the life-like essence intact. Given the number of failures and also-rans, we know just how hard it can be. Roma does it so beautifully, without calling attention to its craft, that it is mesmeric.

Nothing much happens, and yet everything is happening. The country is in turmoil. Protests are growing. There is political unrest. All of this is swirling around the family, which is in the middle of unrest of its own: the man of the house is in the process of leaving, the wife is finding it hard to deal with and the children are learning what it is to be without a father.

Cleo, one of the two maids, is at the centre of Roma’s universe. Even as she discovers she is pregnant and the father is not about to take responsibility, she keeps the household from becoming unglued, and keeps the mistress on track. The power structure is clear: she is the lowly one, the one everyone orders around, and yet, without her, not one of them would survive intact.

As the wife says to the maid: us women, we are left behind. It doesn’t matter which class you belong to. You could be a lowly-paid maid or a wealthy woman, but being abandoned is no respecter of either money or position.
The women bond, even as the country around them disintegrates. Cuaron’s command over his material, which is clearly autobiographical, is superb. And in Roma, we have a film of great beauty, stunning in its simplicity and power to move.

In the 2016 film Call Me By Your Name, Timothy Chalamet bit into a peach like it has never been done before, and swept up hearts world-wide. That truly beautiful boy returns in Felix Van Groeningen’s Beautiful Boy playing a drug addict, in which his character does the ugliest things.

Those who have experienced addiction, or have lived with loved ones who are addicts, know that kicking the habit is near-impossible. The film, based on the best-selling memoirs by the father-son pair of David and Nic Sheff, tells their story — the father trying to be as supportive as humanly possible, the son going down the path of lies and destruction.

Steve Carrell is brilliant as the father who cannot, will not, give up, even as he sees his son yo-yo between hope and despair. Beautiful Boy gets a bit repetitive because we see them going around in a loop, Chalamet chanelling the rage and cunning of a true addict with frightening veracity, and Carrell being there to catch him every time, till, one day, he cannot. These are award-winning performances. There is no doubt that Chalamet, who was nominated for an Oscar with his breakout act in Let Me Hear Your Voice will be back in that front row.

And I hope to be back again at this bountiful film festival, which was a non-stop feast of the great and the good (I’ve seen only one truly awful film) in the friendliest, most diverse city in the world.