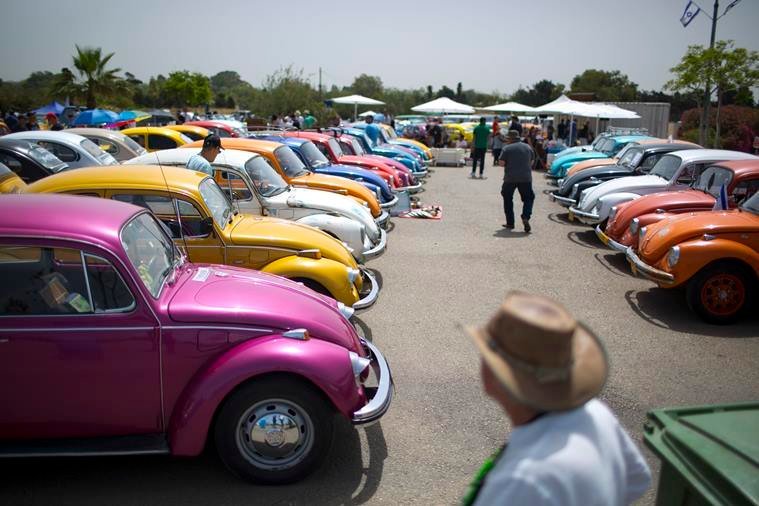 After selling it on and off in the US for nearly seven decades, Volkswagen has decided to end global production of its iconic Beetle from July 2019. The iconic car was sold for about 30 years before its sale was stopped in the US in 1979. The last of the original ‘bugs’, as they are called, were produced in Mexico in 2003.

In 1937, Adolf Hitler who was heading the Nazi party formed a state-owned automobile company called Volkswagens which was later renamed to Volkswagenwerk or “The People’s Car Company.” This project was primarily aimed at developing an affordable yet speedy vehicle that could sell for less than 1,000 Reichsmark (140 $ at that time). Hitler’s pet project of creating people’s car was first announced in 1938 at a Nazi rally.

Next year, the car was unveiled for the first time at Berlin Motor Show. As the World War II began, Volkswagen had to halt its production. Thereafter, it made the transition from being a product synonymous with Adolf Hitler to a symbol of Germany’s rebirth as a democratic, industrial powerhouse after World War Two.

The compact Beetle was first made in Germany in 1938 during the Nazi era and came to the US only 11 years later. In Pic: Volkswagen Beetles are displayed during the annual gathering of the “Beetle club” in Yakum, central Israel. (Source: AP)

In the 1960s, the Beetle was a small-is-beautiful icon of the post-war baby boom generation. Volkswagen discontinued US sales of the “bug” in 1979, but continued production for Mexico and Latin America.

The iconic 1963 Volkswagen Beetle featured in Disney’s Herbie film franchise starting with 1969 feature film titled ‘The Love Bug’. Throughout the franchise, Herbie is seen with red, white and blue racing stripes from front to back bumper. The car also has a racing style number “53” on the front trunk lid.

Herbie is never referred as a Volkswagen or a Beetle in the first firm but called ‘the little car’ or ‘the Douglas Special’. From the second film, Volkswagen name and brand returned and continued till the last film of the franchise ‘Herbie: Fully Loaded’. (Source: Youtube)

In the mid-1990s, at a time when Volkswagen was struggling to rekindle sales in the United States, then-Chief Executive Ferdinand Piech pushed to revive and modernize the distinctive Beetle design pioneered by his grandfather, Ferdinand Porsche. The result was a crescent-shaped car called the “New Beetle,” launched in 1998, which offered playful touches such as a built-in flower vase.

But the original Beetle continues to enjoy a cult status that the newer version never did. Among its fans is Hollywood actor Chris Pratt, who took nearly 12 years to restore a 1965 Volkswagen Beetle, in 2016.

The Jetta, Tiguan and Beetle are built for North America and other markets at a factory in Mexico.

Volkswagen sold a total of 11,151 Beetles in the United States through the first eight months of 2018, down 2.2 per cent from the same period a year earlier. US consumers looking for a small Volkswagen vehicle overwhelmingly prefer the Jetta sedan or a Tiguan compact sports utility vehicle.

Volkswagen revived it in the US in 1998 as a more modern “New Beetle,” but it attracted mainly female buyers. The company revamped it for the 2012 model year in an effort to make it appeal to men, giving it a flatter roof, less bulbous shape, a bigger trunk and a navigation system. (Source: AP)

Volkswagen launched the Beetle Dune in 2012. The Dune is based on a high-performance Beetle R-Line, but Volkswagen has given it a unique look that sets it apart from other versions of the German classic.

The 21st Century Beetle stuck to what made the Beetle an icon in the first place – a fun curvy frame and class. This time around, the Beetle sacrificed curves for lines and a more masculine frame, still retaining its classic look. (Source: AP)

The Jetta and Beetle have been discontinued in India in February 2018. The Beetle was priced at Rs 28.75 lakh due to import duties, and played a role in it not finding many buyers here.

Volkswagen has no immediate plans to revive the Beetle again, but the company wouldn’t rule it out. “I would say ‘never say never,’” VW of America CEO Hinrich Woebcken said in a statement.

The company said two special Beetle models will join the final lineup – Final Edition SE and Final Edition SEL – in the United States and would offer the driver-assistance technology.

The special editions, which come in coupe and convertible body styles, will be available in unique beige and blue colours, in addition to the normal hues. They also get standard extra chrome, new wheels and three-colour ambient lighting inside.

The end of the Beetle comes at a turning point for Volkswagen. The German automaker’s last three years have been rocked by the fallout from a scandal caused by it admitting to cheating on diesel emissions tests. Now, Volkswagen is gearing up to launch a wave of electric vehicles to appeal to a new generation of environmentally conscious consumers – children and grandchildren of the 1960s Beetle enthusiasts.