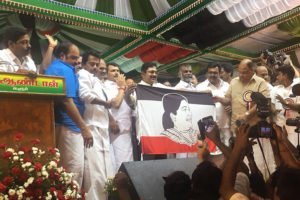 Chennai: Former AIADMK leader and Independent MLA from RK Nagar, TTV Dinakaran, launched his party — Amma Makkal Munnetra Kazhagam — on Thursday from Madurai. Thousands of supporters gathered at the spot, where huge cutouts of Jayalalithaa, MGR, VK Sasikala and others leaders have been put up.

VK Sasikala’s nephew had appealed to his supporters and the public to attend the function. Dinakaran announced the name of his party, unveiled the flag and the symbol.

The AIADMK was quick to hit out at the new party launch. “It was basically a mosquito. When it came and when it flew back no one knew. It was a ‘shani (Bad omen)’ over our party which has now gone,” said Tamil Nadu Minister, D Jayakumar.

The announcement comes days after superstar Kamal Haasan entered the political scene with the launch of his party ‘Makkal Needhi Maiam’ from Madurai and actor Rajinikanth had also declared his intention to start a political outfit but is yet to launch his party.

Dinakaran contested as an independent candidate to trounce the AIADMK’s E Madhusudhanan in the seat rendered vacant by the death of Tamil Nadu chief minister J Jayalalithaa. Ever since his victory, the leader has been accused of “buying” his votes.

Dinakaran got 89,013 votes as against Madhusudhanan’s 48,306 votes in the bypoll. The DMK’s Marudhu Ganesh was a distant third as he secured 24,681 votes and had to forfeit his deposit, along with 57 others.

Dinakaran has been locked in a court battle with the AIADMK after his plea to be assigned the two-leaf symbol was turned down by the Election Commission. The court asked the poll body to assign a new name and symbol to the leader, who then decided to launch his own political outfit after months of bitter feud with Tamil Nadu’s ruling party.

“To overcome the hindrance put up by enemies and to bring back the success of revolutionary leader Amma, I am starting this political journey. Let Tamil Nadu raise its head and the life of Tamils prosper will be our slogan to establish Jayalalithaa’s principles,” Dinakaran said in a statement.

Last year, the leader was arrested for being involved in an alleged bribery scandal. He and his aunt VK Sasikala were then evicted from the AIADMK by chief minister E Palaniswami.

The duo’s explusion was one of the last remaining points of contention between two factions of the AIADMK that broke after Jayalalithaa’s death. The faction led by O Panneerselvam then went on to join hands with the EPS faction, leading to a joint AIADMK front.

‘Have Not Seen her Face Till Date’: TN Governor Denies Any Wrongdoing in ‘Sex for Degrees Case’

Nirmala Sitharaman’s Journey: From Madurai to South Block via JNU